The Hobo: A Chopper Profile 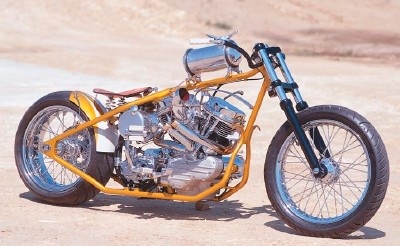 The Hobo is aptly named, as its assorted bits and pieces were collected from many sources over a two-year period. All the adopted parts, which include Schwinn bicycle handgrips and a throttle from a jet ski, were assembled with only a rough idea of the desired outcome; many others, such as the fender brackets and handlebars, were handmade by the builder.

Seated on top of the hardtail frame is a chromed Moon fuel tank. Forks are standard Harley-Davidson telescopics, but they carry no headlight; instead, it's mounted low on the left side of the frame, just ahead of the replica Panhead engine, which exhales through stubby handmade pipes.

Gears are stirred by a hand shifter topped with a beer-tap handle borrowed from a local saloon. Both footpegs, along with the kick-start pedal, came from a bicycle. One of the few off-the-shelf chopper components is a rear sprocket/brake rotor from the Exile catalog.

While most choppers originate with a design and are then assembled with specific components, The Hobo materialized in a rather different manner. But while the end result may not have been envisioned from the start, if the intent was to build something completely different, then The Hobo came out exactly according to plan.

Go to the next page for more photos and details of this Rev Tech-powered chopper, the Hobo.For more information on custom choppers and motorcycles, see: