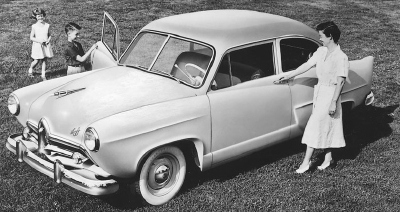 The Henry J Deluxe featured a strong engine and low curb-weight, but was hampered by a high price and lack of features.

Kaiser-Frazer went from being the "postwar wonder" of 1947 and 1948 to looking like a postwar blunder in 1949, falling from ninth to fourteenth in Detroit production. Determined to press on, chairman Henry J. Kaiser borrowed $44 million from the Reconstruction Finance Corporation to maintain inventories, then tooled up for new models.

One result was the abrupt departure of co-founder Joseph W. Frazer. Kaiser promised the RFC that part of its money would go toward a new small car that any American could afford. With no little modesty, he named it the Henry J.

Designer Howard A. "Dutch" Darrin had proposed a short-wheelbase compact car derived from his beautiful 1951 Kaiser, which was already locked up during Henry J planning. But the head man, wanting something all-new, went with a proposal from American Metal Products, a Detroit supplier of frames and springs for car seats.

Darrin reluctantly tried to improve this ungainly little two-door fastback sedan, applying his trademark "dip" to the beltline, windshield, and rear window -- plus little tailfins. Though the result was still pretty weird, The New York Fashion Academy named Henry J its 1951 "Fashion Car of the Year."

Power was provided by Willys L-head engines: a 134 cubic-inch four and a 161-cid six. Incredible economy was promised for the 68-horsepower Four. The 80-horsepower Six turned out to be something of a hot rod, with 0-60 times of around 14 seconds, helped largely by low curb weight (around 2300 pounds). Though built on a compact 100-inch wheelbase, the Henry J could handle four passengers along with a considerable amount of luggage.

K-F began its 1951 model year in March 1950. For awhile, the Henry J was quite popular, and nearly 82,000 were sold for the model year. But that evidently satisfied demand, for sales went down sharply through 1952. One reason was price. At $1363, even the four-cylinder model was only $200 cheaper than a full-size six-cylinder Chevrolet -- and far more basic. The Henry J Six offered "DeLuxe" trim starting at $1499, but it was only ­slightly less stark.

The 1952 Henry J Vagabond was basically a mishmash of leftover parts, with "continental" exterior styling over a 1951 frame.

A mild facelift gave 1952-54 models a smart new full-width grille, taillights moved from the body to the fins, and nicer interiors. An interim '52 measure designed to use up leftover stock was the Vagabond -- a '51 wearing "continental" outside spare tire, identifying script, and a hood ornament of black plastic and chrome. After this, Henry Js were called Corsair or Corsair DeLuxe, priced around $1400 for the four, $1560 with the six.

But nothing seemed to work, so the Henry J departed in 1954. An estimated 1100 were sold that year, all of which were reserialed '53 leftovers. Some 30,000 were built altogether. Left still-born were plans for a hardtop, wagon, four-door sedan, and even a convertible.

Many felt the original approach was wrong. Lacking glove- boxes, trunklids, and other expected features, the '51s were simply too plain for most buyers. As Joe Frazer later commented: "I would have brought it out dressed up." And indeed, that's what Sears did with its short-lived Allstate derivative (see Allstate). Then, too, the market wasn't quite ready for compacts (though it soon would be), and K-F was looking increasingly terminal, which surely kept some buyers away.

In all, this was a classic case of too little, too soon. Like Hudson's equally ill-starred Jet, the Henry J was the wrong car at the wrong time.