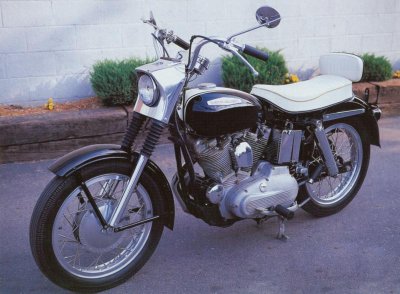 The new Shovelhead engines helped bikes such as this 1967 XLH Sportster set speed records at Bonneville.

With the addition of an electric starter and the requisite larger battery, a fully dressed Electra-Glide could amass a good 800 pounds worth of resistance when it came time to move out. Harley-Davidson countered with deeper-breathing cylinder heads for the Big Twin that resulted in a 10-percent increase in rated power. Topping the new heads were valve covers that resembled an inverted shovel, and enthusiasts quickly bequeathed the new motor a fitting nickname.

The new "Shovelhead" closely resembled the Sportster's motor-already ten years old by that time-though the smaller V-twin was built in unit with its transmission, whereas the Big Twin, as always, was a separate entity. Few at the time could have guessed the Shovelhead's 18-year reign would prove to be the most turbulent era in Harley's long history.

After going public with its stock in 1965, Harley-Davidson found itself facing ever-stiffer competition from overseas manufacturers. Profits declined, and the company's financial picture looked bleak. Harley began soliciting buy-out and merger offers, and one eventually materialized. In January of 1969, Harley-Davidson merged with sporting-goods manufacturer American Machine and Foundry (AMF).

AMF supplied money to keep Harley-Davidson afloat, and in an attempt to insure a return on its investment, stipulated increased production and expansion of Harley's line of smaller motorcycles. Harley had worked with Italian partner Aermacchi to produce the single-cylinder four-stroke 250-cc Sprint in the early 1960s, and now tapped Aermacchi again for a string of even smaller two-stroke machines. These were Harley-Davidsons in name only, and probably harmed the company's image more than they aided the bottom line.

Adding to the problem was that Harley's traditional offerings were losing the almost total domination they had enjoyed in their respective markets. For more than a decade, the Sportster was "King of the Drags," while the big FL had long been the consummate touring machine. By the mid-1970s, both were being challenged by less expensive -- and more refined -- Japanese competitors.

Models such as the 1973 FL Electra-Glide represented the brief marriage of Harley-Davidson and AMF.

Though the Sportster saw an increase in sales during the 1970s, it wasn't as impressive in terms of profits-or quality control. The same could be said for the Big Twins, while the smaller Aermacchi models just plain took a beating.

Yet there were some bright spots. One of the company's most influential products debuted in 1971 as the FX Super Glide. Designed by "Willie G." Davidson, it earned the honor of being the first factory custom. While not an overwhelming success itself, the Super Glide spawned a number of models styled along similar lines, and these eventually became Harley's stock-in-trade.

As the Motor Company soldiered on through the 1970s, it became increasingly apparent that hard times lay ahead unless some changes were made. Late in the decade, a handful of Harley executives approached AMF with an offer to buy back the company AMF accepted, and in June of 1981, Harley-Davidson was once again in control of its own destiny.

It wasn't going to be an easy trip back to prosperity, but employees, dealers, and owners alike seemed eager to get on the road. And as with any motorcycle journey, the first order of business was to tend to the machinery.