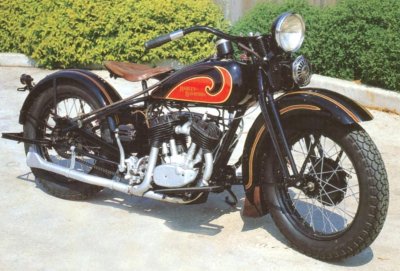 The 1931 Harley-Davidson Model D was one of the first Harley's to offer a flathead V-twin engine.

Harley-Davidson's first flathead V-twin was a 45-cubic-inch unit used in a new bike called the Model D, which was intended to compete with the highly successful Indian Scout. The 45 would prove to be a versatile and long-lived powerplant as it remained in production until 1973. Along the way it served duty not only in street motorcycles, but also in three-wheeled Servi-Cars, military WLAs of the 1940s, and WR racing bikes of the 1950s. Larger 74- and 80-inch Big Twin flat-heads followed, but neither was as reliable or long-lived as the under-stressed 45.

Though flatheads (also known as side-valves) were theoretically less efficient than overhead-valve or even F-head (intake over exhaust) configurations, flatheads were far easier to service and had evolved to the point where power output was competitive-both of which had been proven and capitalized upon by Indian. Factory horsepower charts showed that Harley's flatheads slightly out-produced its similar-sized F-heads, most of the advantage coming (surprisingly) at high rpms. These figures were reflected in on-road performance, where flathead models didn't accelerate quite as quickly due to a sizable increase in weight, but had slightly higher top speeds.

Unfortunately, the flathead models appeared just months before the stock market crash of October 29, 1929. During the depths of the Great Depression that followed, Harley's sales fell to less than a fifth of what they'd been before the crash. But the company managed to keep its head above water while many others were going under, and as the economy began to recover in the mid-1930s, Harley found itself with fewer competitors and an eager clientele.

Prior to the depression, Harley-Davidson focused on its V-twin motorcycles. But the economic slump prompted the company to revive some of its earlier single-cylinder models and even bring out new ones. Also joining the line were industrial engines, special-use motorcycles, and the three-wheeled Servi-Car, which carried its 45-cid flathead V-twin all the way through to its final edition in 1973. Big Twins were not totally forgotten, however, as an 80-cubic-inch version joined the 74-inch model in late 1935.

Despite the flathead's virtues, Harley-Davidson felt a more advanced motor would be needed to keep the company competitive in the coming years. Work began on a new overhead-valve V-twin in 1931, and though it would take five years to come to fruition, the resulting "Knucklehead" would prove a historic advancement.

Yet the flathead design was not ready for retirement. Even after the Knucklehead was introduced in mid-1936, both the 74- and 80-cubic-inch Big Twins remained in the line, as did the 45. Though the 80 would be dropped after 1942 with the 74 following suit after '48, Harley-Davidson continued to offer a smaller-displacement flathead V-twin until the mid-1950s. And of course the Servi-Car carried a flathead through 1973.

Continue to the next page to learn about the next stage in Harley-Davidson's evolution.