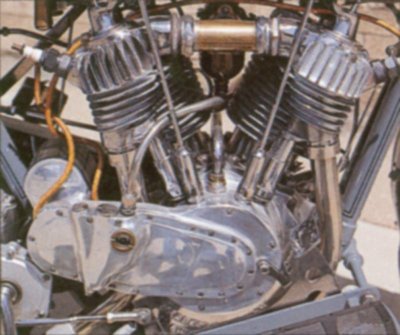 When one thinks of Harley-Davidson engines, thundering V-twins is what usually springs to mind. Though different designs in a number of different sizes have been produced over the years, the largest versions have always been referred to as Big Twins (though the same term is also used for the bikes that carried those motors). There have been six distinct Big Twin design generations, and the company's history is often segmented in accordance with those six generations -- as we have in this article.

One more note. While the general rule is that engines are gas-powered and motors are electric-powered, Harley-Davidson (as well as most motorcycle historians) typically refer to the powerplants as motors -- probably because the vehicles have always been called motorcycles, not enginecycles -- and we will follow suit.

1909-1929 Intake Over Exhaust (IOE): Harley's early single-cylinder motors had overhead intake valves that were opened by vacuum rather than mechanical cam action. The first V-twin introduced in 1909 likewise had vacuum-operated intake valves-which didn't work particularly well. When it was re-introduced in 1911, the V-twin had normal cam-actuated intake valves. Exhaust valves were mounted in the block (side valve) in all cases. Early V-twins displaced 50 cubic inches; a 61-cubic-inch version was added in 1912.

1930-1935 Flathead (side-valve): Big Twin flatheads led the line for only six years before being overshadowed by Harley's first overhead-valve V-twin. However, flathead Big Twins remained available through 1948, selling alongside their more modern siblings. Original Big Twin flatheads displaced 74 cubic inches; an 80-inch version was added late in 1935. Though flatheads were theoretically less efficient than the former IOE designs, they had evolved to the point where they were not only more powerful, but also easier to work on-a major advantage in the days when motors required more maintenance and weren't as reliable as they are today.

1948-1965 Panhead: The Panhead motor was given new aluminum heads that ran cooler than the former cast-iron ones and helped produce more power. It also introduced hydraulic valve lifters, which minimized the tedious task of adjusting valves and also allowed the motor to run more quietly. Like the Knucklehead before it, riders coined the nickname "Panhead" in reference to the motor's valve covers, which now looked like upside-down roasting pans. Initially offered in 61- and 74-cubic-inch sizes, the 61 was dropped after 1952. In its final year, the Panhead was fitted with an electric starter -- a real convenience, as Big Twins had become notoriously hard to kick over.

1966-1983 Shovelhead: Redesigned heads gave the Big Twin a bit more power, and the valve covers topping them now looked like upside-down shovel scoops-hence the "Shovelhead" nickname that was once again bestowed by riders. Initially sized at 74 cubic inches, an 80-inch version bowed for 1978 and eventually became the sole offering. Though the new Evolution motor arrived in 1984, some Big Twin models continued to carry a Shovelhead for that year.

1984-present Evolution V2: Harley's Evolution V-twin addressed many of the complaints leveled against the Shovelheads, as it was smoother, quieter, more powerful, and more reliable. Though some riders early on began referring to the new motor as the "Blockhead" due to its smooth, block-shaped valve covers, the name never stuck and this latest generation of the 80-cubic-inch Big Twin is usually referred to as the "Evo." 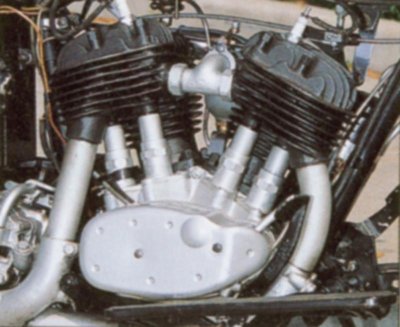