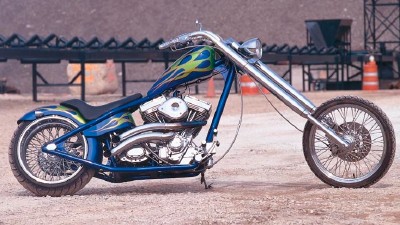 No chopper owner wants to be seen on a ride that looks like any other. Fortunately, by combining catalog items with some creative imagination, almost any bike can end up being utterly unique, like the Hard Tail Chopper.

Based on a frame from Accessories Unlimited, Hard Tail was fitted with 10-inch-over Mean Street inverted forks set at a 47-degree rake. Eighty spoke wheels dress each end, both carrying a disc brake; in back, the disc is part of the left-side drive sprocket, which allows the right side of the wheel to run "open." Driving that sprocket is a 6-speed transmission, itself driven by a 113-cubic-inch S&S engine with an exhaust system from Jesse James' West Coast Choppers.

Cobalt Blue paint covers the frame and all sheetmetal, the latter also sporting Candy Green flames. It's an unusual color combination to be sure, but that's the kind of "creative imagination" that makes this bike like no other.

Go to the next page for more photos and details of this imaginative chopper, Hard Tail. 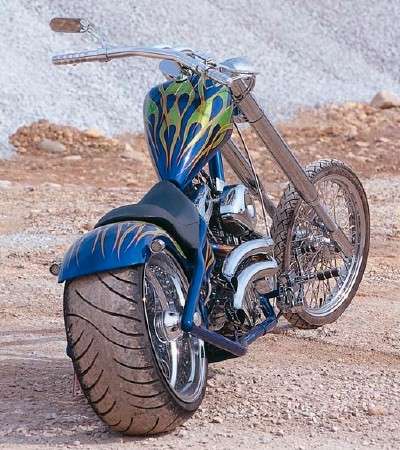 Whether in design or choice of colors, it’s often the paint scheme that sets a chopper apart from the crowd.

Hard Tail is an ideal custom chopper with inner workings as intricate as its paint job. Below are more pictures and details of this creative chopper.

Regulation Works: As Motorcycle Helmet Laws Ease, Injuries Increase
What’s the safest type of motorcycle helmet?
What should be in your motorcycle tool bag?