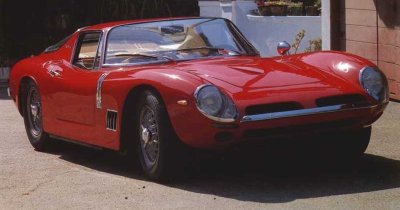 Low and squat, the Bizzarrini GT Strada 5300 began life as an Iso, hence its styling resemblance to the Grifo and use of the same Chevrolet Corvette 327 V-8.

That the Bizzarrini GT Strada 5300 should bear a close resemblance to the Bizzarrini-designed Iso Grifo, therefore, should hardly come as a surprise. In the early 1960s, the name of Giotto Bizzarrini seemed to crop up all over the Italian supercar industry, the engineer being involved with Ferrari, Lamborghini, Iso and his own little carmaking concern in the space of just a few short years.

Bizzarrini was one of Ferrari’s most respected engineers in the late 1950s/early 1960s. When chief engineer Carlo Chiti and several other experienced hands left the Maranello company, Bizzarrini did too, trucking off to Livorno to work freelance. Soon afterward, he was commissioned by Ferruccio Lamborghini’s fledgling firm to design a Ferrari-like V-12 and hired to lay out a new chassis for Iso of Milan.

This chassis was the true ancestor of the Bizzarrini GT’s. Typical of period Italian practice, it was a fabricated pressed-steel platform to which was attached an all-independent coil-spring suspension with De Dion rear geometry. Power was provided by a 327-cubic-inch Chevrolet Corvette V-8 tuned for 300 or 365 horsepower (SAE). Iso’s first Bizzarrini-designed chassis was unveiled with the Rivolta coupe in 1962.

At the same time, Bizzarrini was working on a short-wheelbase version of this chassis that ultimately formed the basis for his GT Strada 5300. The same basic platform with four-barrel 365-bhp Corvette power was also slated for Iso’s forthcoming Grifo A3L, a two-seat derivative of the four-place Rivolta.

Both cars were unveiled in prototype form at the Turin Motor Show of November 1963, with the future Bizzarrini titled Iso A3C “competition coupe.” Though the A3C and A3L had clearly been styled by the same hands -- those of Giorgetto Giugiaro at Bertone -- they were completely different in detail.

The GT Strada 5300 sported a luxuriously trimmed interior and was offered as a limited-edition road car with a new Bizzarrini badge.

Confused? It gets better. Badged as an Iso, the future Bizzarrini appeared at the 1964 Le Mans 24 Hours, finishing 14th at an average 106.75 mph. This racer carried an aluminum body with headlamps recessed behind sloping plastic covers, and a grille composed of two wide slots. Wheels were cast alloy, and engine cooling vents appeared on the flanks immediately behind the front wheelarches.

Meantime, the Grifo went on sale with the same general Bertone lines and similar front-fender exhaust grids, only its body was made of steel, had exposed headlamps and a less radical nose, and sported a more luxuriously trimmed interior. Everyone noticed the obvious relationship between the two cars, but the “competition coupe” was now offered as a limited-edition road car with a new Bizzarrini badge, and no one, least of all Iso, seemed to mind.

Bizzarrini’s tiny premises couldn’t build more than a few cars at a time, so the “production” GT Strada 5300 (the name means “road” in Italian, the number represents the Corvette engine’s cubic-centimeter displacement) was strictly a hand-assembled affair. Rolling chassis came from Iso, while the Bertone-styled body was built by BBM in Modena. Bizzarrini simply put them together.

The result was a low-slung high-performer with vivid acceleration and a 145-mph top speed. Fuel “economy” was only 12 miles per U.S. gallon, a definite drawback in Europe with its less-available, higher-priced gasoline. Then again, this was the sort of car likely to be bought only by rich poseurs, so who cared?

It’s not clear how many of these cars were actually completed, though the figure of 149 quoted by one source seems rather high. What is clear is that very few survive. In any case, Bizzarrini himself quickly lost interest in this project and turned his attention to the smaller GT Europa 1900, an equally rare but more humble machine powered by a 1.9-liter four-cylinder engine from Opel of Germany.

For more details on the Bizzarrini GT Strada 5300 and other sports cars, see: