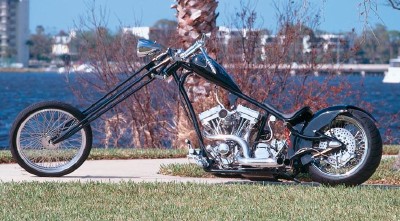 In the world of choppers, Thee Darkside of Daytona, builder of the Girder Chopper, has a well-earned reputation for going above and beyond the typical build. Whether in the powertrain or the configuration, something is always done in the extreme.

Girder Chopper is based on a Killer Choppers hardtail frame, which has been modified in nearly every dimension, with a 6-inch stretch, 10-inch rise, and a 55-degree fork rake. Girder forks were stretched 22 inches for the profile Thee Darkside wanted. Spoke wheels reside at each end. The front one rides without a brake; in back, a Hawg Halters disc is used, as is a 250-series tire. Power comes courtesy of a 117-cubic-inch Ultima V-twin fitted with a 'snaked' exhaust system bent by Thee Darkside.

The entire bike, including chassis and sheetmetal, was then cloaked in black, which strikes a stunning contrast to the chromed pieces. It all flows together to form a chopper befitting Thee Darkside's brand.

For close-up pictures of the Girder chopper extreme custom-built motorcycle, go to the next page.For more information on custom choppers and motorcycles, see: 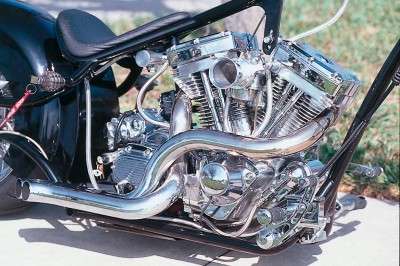 The Girder chopper's snaked exhaust pipes are hand-bent by the builder for a distinctive look.

Thee Darkside of Daytona likes to go to extremes, and the Girder Chopper is no exception. Below are some close-up shots of this custom-built machine.

A machined primary cover is yet another one-of-a-kind touch on this radical chopper.
Spired handgrips and machined mirror mounts lend their own custom touch.
Stretched girder forks give this chopper its name, pivoting up and down on short arms to compress a coil-over shock mounted behind the headlight.