Browse the article How the G-Wiz Electric Car Works 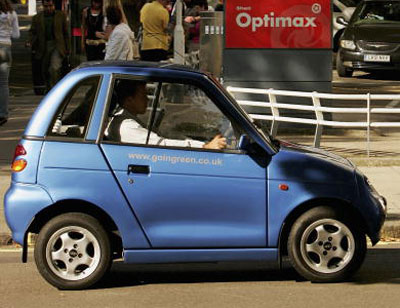 England's most popular electric car, the G-Wiz, drives past a petrol station in London. Are its energy-saving qualities too good to be true? See more pictures of small cars.
Scott Barbour/Getty Images

­Sitting in front of your computer, you click "Buy Now." Making sure the correct selection is in your online basket before you check out, you notice the order total. For one it­em, the cost will be £9,194.00, about $18,000 USD as of February 2008. But this unusually high price for something purchased over the Internet doesn't faze you, because you're not buying a really expensive book or getting ripped off by a third-party seller on Amazon.com -- the product you're ordering is the Reva G-Wiz Automatic Electric Vehicle, an emission-free electric automobile made in India and available through UK retailer GoinGreen.

Ordering from an online showroom is just one of the company's tactics that aim to cut costs and lessen the effect urban travelers have on the environment. With smaller, more efficient cars like the Smart Car all the rage in England, the G-Wiz has quickly become one of the UK's most popular electric vehicles, with more than 900 models driving around the streets of London [source: GoinGreen]. GoinGreen advertises the G-Wiz as the greenest vehicle available for purchase in England -- its Web site claims the G-Wiz's electric engine produces zero direct emissions, and a full, eight-hour charge costs about $1 (50 pence), the equivalent of nearly 600 miles per gallon. The vehicle is also exempt from London's hefty new congestion charges, and drivers can park for free in certain areas and make use of on-street charging points while away from the G-Wiz.

So buying a fairly cheap electric car, saving more in the future on energy costs and helping the environment all sound like great fun -- but is it too good to be true? The idea of ordering an automobile online and having it delivered to you instead of going to a car dealership might be enough to set off some warning lights. On top of that, some nasty publicity and concerns over safety have granted the G-Wiz as many detractors as admirers.

How much are the automakers sacrificing in safety to make an affordable, clean car? Is it really an efficient automobile, or are GoinGreen and Reva just greenwashing the Brits? In this article, we'll take a look the G-Wiz and some of the controversy surrounding it. 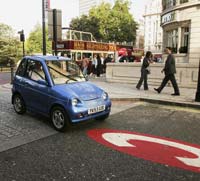 Scott Barbour/Getty Images
Both of the above are quadricycles. Which one's safer?
MPI/Getty Images

The G-Wiz is actually known as a "quadricycle" in Britain -- the contraption weighs about 880 pounds (400 kg) without the battery and produces less than 15 kW of power, so according to the European Commission, it's not a car. Although it's legal to drive a G-Wiz on any road in the United Kingdom, GoinGreen stresses that the vehicle was "designed as a low speed urban runabout and commuter car," and they "do not recommend it is used [sic] on motorways and fast roads."

There are three different G-Wiz models available. Re­va no longer produces the original two versions, the G-Wiz dc and the G-Wiz ac, but GoinGreen still offers used models on its Web site. The newest version, the G-Wiz i, has improved safety standards and will be available in February 2008.

Despite the different names and varying safety packages, each type has the same general technical specifications. A G-Wiz is a two door, "2 + 2" seating arrangement, which means two adults can fit up front and two children can squeeze in the back. Eight six-volt lead-acid batteries, located under the front seats, power the tiny quadricycle's electric motor, which is located in the back. You can charge the battery of the G-Wiz by simply plugging a charge cable into the side of the vehicle and any electric outlet, the same way you would charge your cell phone. (GoinGreen does recommend protecting a typical household outlet with an RCD (Residual Current Device), or a surge protector). Two and a half hours will charge the battery 80 percent, while an eight-hour charge will give the car its full charge. Using electricity, especially from a renewable source, can save you money and help the environment -- a years worth of power would cost about $100 -- but the downside is the life of the battery. A replacement pack of eight batteries costs £1,595, or more than $3,000, and the batteries last between two and three years. This is the main reason why many people are looking toward fuel cells, which are charged quickly and don't need replacing.

The range of a G-Wiz is only about 50 miles per battery charge, but as mentioned before, the quadricycle wasn't built for long drives through the English countryside. The top speed of the vehicles range between 40 and 50 miles per hour (64-80 km/h) -- very slow compared to most other cars on the road, but this emphasizes why the G-Wiz is for an urban environment. The speed limits in London, for example, are typically no faster than 40 mph (64 km/h), and data downloaded from G-Wizzes driving around the city showed that customers recorded an average speed of 10 mph (16 km/h). London does happen to have the slowest traffic in Europe -- UK traffic information service KeepMoving.co.uk reported that all traffic, G-Wiz or not, moves at an average of 12 mph (19 km/h) in England's capital.

So the G-Wiz can save you money -- but will it save you from a head-on collision with a delivery truck? Read the next page to find out. 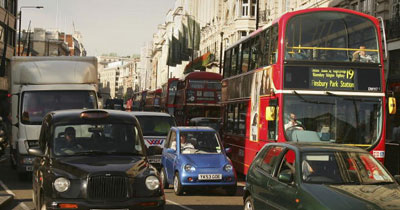 One of the main concerns with compact cars is the safety of the vehicle. The lighter weight of these vehicles makes them more susceptible to damage in an accident, and automakers need to be creative if they want to build a strong, protective body. The close quarters also put drivers and passengers at an increased risk of being hurt by poorly designed crumple zones or broken windshields.

The G-Wiz is very compact -- it's only about 8.5 feet long and 5 feet tall -- and since it's classified as a quadricycle, it's not required to undergo the same kinds of safety tests regular automobiles do.

So in 2004, Reva introduced the G-Wiz dc onto London streets, following up in 2006 with the G-Wiz ac. No official crash tests were performed on these vehicles, so consumers had no idea how someone would fare in a collision. It wasn't until the summer of 2007 that UK car magazine Top Gear performed its own series of crash tests with the G-Wiz. People were finally able to see the destruction a wall -- or better yet, a simple table -- could deliver to the popular electric vehicle.

The results of the crash tests, which you can view on the Jalopnik Web site, are painful to watch. One video shows a G-Wiz driving into a wall at 40 mph, while another shows two G-Wizzes, traveling at 30 mph, hitting each other. In both, the front section of the G-Wiz gets completely torn apart and crumpled in toward the driver and passenger dummies. Another video, seen here on YouTube, puts the G-Wiz up against a­ table, with simultaneously amusing and horrifying results.

GoinGreen offers only this explanation on their Web site: "Whilst larger, heavier cars in general perform better in crash tests, statistics show they tend to be driven less defensively and at higher speeds and so they are also more likely to injure other road users." Reva no longer manufactures the models used in the tests, but they still offer used versions of the G-Wiz dc and G-Wiz ac on their Web site. More than 900 of these initial models are driving around the streets of London, and more than 2,000 elsewhere around the world.

On top of this, Reva had to recall several hundred G-Wizzes in November 2007 to replace or repair every battery charger -- one of the quadricycles suddenly overheated and burst into flames while parked. Fortunately, no one was hurt, but the idea that the G-Wiz was a ticking time bomb, whether or not it was driving, wasn't comforting to many.

There seem to be good intentions and a few good ideas behind the "socially responsible" G-Wiz. Even the distribution method is interesting -- after ordering online, the G-Wiz is either driven to you if you live in London or delivered by trailer if you live elsewhere in England. But the G-Wiz, designed in California and manufactured in India, seems to sacrifice too much to make the vehicle affordable and environmentally friendly. The G-Wiz doesn't even come with airbags, simply because, according to GoinGreen, the "majority of the cars on the road in the UK do not have these features." Another offbeat and efficient vehicle, on the other hand, the Aptera, also came out of California -- its makers went above and beyond to ensure safety standards weren't just met, but exceeded.

If you want to know more about electric cars and other offbeat vehicles, take a look at the next page.