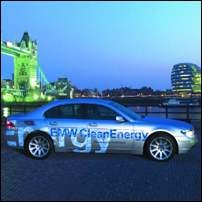 BMW's recent concept car, the hydrogen-powered 7-Series, is still a long way from arriving at dealerships.

Faced with the ever-increasing cost of gasoline, automakers worldwide are working overtime to cost-effectively improve vehicle fuel economy while still meeting today's strict emissions requirements. One promising way to boost fuel economy is to add hydrogen to the fuel/air mixture in a conventional gasoline engine. It's called a hydrogen-boosted gas engine. However, since hydrogen isn't readily available at your local filling station, selling a hydrogen-boosted gas engine hasn't been on any automakers' short list. Until now, that is.

In this article, we'll explain a new technology that utilizes a fast-response on-board reformer to generate a small amount of hydrogen from gasoline. This hydrogen is added to the engine's normal air/fuel mixture. Engines designed to run on a mix of hydrogen/gasoline can see a fuel-economy gain of 20 to 30 percent with no requirement for control of harmful NOx emissions, oxides of nitrogen. On the next two pages, we'll tell you how this new fuel-saving engine works and why it looks like it has the potential to become a viable, fuel-saving technology. We'll address the following issues regarding this new technology: 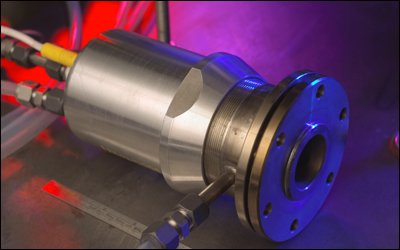 The Future of Hydrogen-Boosted Gas Engines 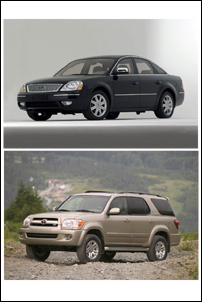 Imagine a full-size SUV like the Toyota Sequoia [bottom] that gets the fuel economy of a large sedan like the Ford Five Hundred [top]. The hydrogen reformer could make that a reality.

Hydrogen-boosted gasoline engines require neither NOx or particulate control filters and require only a low cost oxidation catalyst to control small amounts of exhaust (unburned hydrocarbons) formed mostly during engine start-up and early warm up. Additional cuts in emissions control requirements stem from the engine's ability to use only the clean hydrogen enriched charge during the cold start phase when 90% of emissions are generated in the emissions test.

The hydrogen-boost system is effectively a bolt-on technology that can be added to an existing vehicle's engine compartment. According to the developers, the cost of the system is less than half of the added cost for diesels. U.S. auto industry production costs for tooling diesels to replace gasoline engines are enormous and would be difficult for U.S. makers currently struggling with financial difficulties.

A prototype hydrogen-boosted engine is now being installed in a V6-equipped SUV that has sufficient free space for the reformer and its related system. The start of long-term road testing for performance, reliability, and durability information is planned for later this year with the first production application marketing expected for 2010.

Performance data generated during the early phase of testing is certain to be watched intensely by virtually everyone concerned with automotive and energy environmental matters in part because the system is associated with the buzzword "hydrogen."

High on the list of interested parties are makers of the large SUVs and vans for which government regulators are seeking 10 percent higher average miles per gallon vs. the 2007 level of 22.2 mpg. The new level of 24.1 mpg is to be adhered to by 2011.

Four-cylinder vehicles will likely also be prime candidates for the technology as high gasoline prices continue to generate competition among the high fuel economy models seeking mpg leadership. A contributing factor in the compact car market may be a concern with hybrid vehicle lifetime cost due to system complexity and battery replacement, reported in some cases to be as high as $5000. This is just now beginning to be reflected in low resale values as early production hybrids reach high mileage.

The hydrogen-boosted engine will not be alone, however, in the race for fuel economy leadership position. Advanced turbocharged downsized direct injected variable valve engines, common-rail diesel engines, hybrids, and flex-fuel vehicles are all vying for the automaker's attention in the fuel-economy race.

None of these technologies can boast all of the advantages of the hydrogen-boosted engine, namely dramatically increased fuel economy, minimal emissions control, and overall cost-efficiency. In the end, it will take a combination of many technologies to address this nation's thirst for driving freedom, but it's likely that we'll hear a lot more about the hydrogen-boosted engine in the future.