The Lifecycle of an Electric Car Battery

How long will an electric car battery last? The lithium-ion battery pack in the Tesla Roadster is projected to have a lifespan of about 5 years or 100,000 miles. At the end of that time the pack will need to be replaced, at a cost of approximately $10,000. Sure, that's expensive, but the Roadster itself will cost almost $100,000, which makes the cost of the battery pack seem affordable. Many, perhaps most, owners will no doubt prefer to replace the battery pack rather than buy a brand new Roadster. 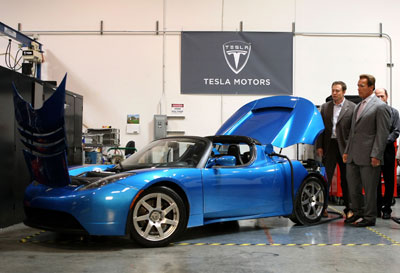 Admittedly, battery maintenance costs will add to the expense of operating any EV. The battery packs that are used in EVs will be kept tightly contained, so you'll most likely need to take your EV to the dealership to have your battery serviced. Another point to consider is that at the present time, this is a relatively new technology. As EVs become more common on the roadways, some of the high prices associated with them will decrease. But right now, the Tesla Roadster's $10,000 battery is one of our only reference points. Will the batteries in other EVs cost more? Will they cost less? Will the cost of replacing the battery in some EVs outweigh the cost of simply buying a new vehicle? Only time will tell.

Electric Concept Cars
Over the past several decades, a number of electric concept cars have been developed. Some, like the Electrovair II and the Electrovette, never made it to the showroom floor, while others on this list may have a fighting chance. Here's a short list of EV concept cars and the batteries that power them:
­