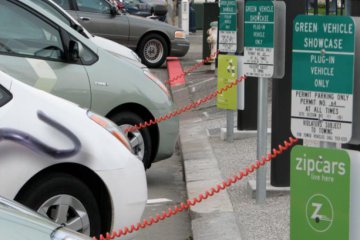 Have you ever seen a plug-in station?
Wikipedia Commons

Consumers are still paying a premium in the showrooms on new technologies. Some relief, such as tax rebates, are available from the feds, although these incentives have tightened in recent years. For example, where the Toyota Prius hybrid once saw a tax rebate, no incentive is offered now that the model has achieved “mainstream” status. And the automaker has not knocked much off the sticker since, either.

So it’s important to weigh the benefits of emissions reduction, fuel economy improvement, and the amount time you expect to keep the vehicle against the price tag. Many early adopters of green cars, for example, were encouraged by rising gas prices. That is, the higher sticker price seemed a better value if fuel efficiency meant saving on gas. On the other hand, some hybrids come at a premium for only a marginal fuel efficiency — that is, an traditional car may actually get better mileage for a better price. In short, it pays to do your homework.

The Department of Energy’s list of greenest vehicles for 2012 models just came out, and while it features quite a few electric and quasi-electric powered vehicles, there are still plenty of “normal” eco-friendly vehicles for buyers to choose from.

A bit of a controversy still exists as to which vehicle is actually the greenest. According to the U.S. Dept. of Energy, the Nissan Leaf led the class of 2011, while GreenerCars.org had the Honda Civic GX CNG at the top of the green leader board tied with the Leaf.

GreenerCars has the Chevy Cruze Eco ahead of the Volt, while the DOE has that order reversed. Both sites’ rankings account for carbon footprint and score for energy impact. In my own recent testing of both vehicles, I gave the top nod to the Cruze Eco over the Volt since my lifestyle did not allow for constant recharging of the Volt –- those with charging stations or outlets at their beckon call would have reversed results.

Some vehicles have not even made the government or third-party lists due to their low sales volume or esoteric nature. These include the electric Tesla and Fisker models as well as the new smart fortwo electric drive and the Ford/Azure Dynamics Transit Connect Electric. In a perfect world with EVs being charged during the low-peak periods and using alternative energy sources such as wind or solar, this class vehicle would lead the list of greenest cars, and my list below of the 10 Greenest Vehicles reflects that. 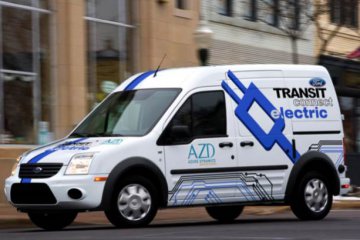 Check out this electric van!
Ford

More eco-friendly vehicles are on the way to the U.S. market and along with that will come additional infrastructure advancements set to accommodate an electric lifestyle. Many urban areas have already seen public charging stations popping up with more on the way.

The green movement is also pushing businesses and government entities to development plans that will accommodate EV-specific parking and charging areas, and a handful of vehicles on the way to market (including some already available) offer a $7,500 federal tax incentive along with them.

Ford has a couple of new EVs coming soon that include the Transit Connect Electric, developed in a partnership with Azure Dynamics, targeted at corporate consumers, as well as the Focus Electric, which will be marketed to consumers in a limited launch. Both vehicles will score very high on a green scale.

Tesla’s new Model S sedan is promised for next summer and will be available with a couple of range options with pricing a good bit less than its six-figure limited-production roadster model.

Green Is as Green Does

Do you really need to run out and spend what money you have left in your portfolio to become a member of the green revolution? Absolutely not. There are many things you can do right now to ease your dependency on fossil fuels while also clearing the air a bit. Following just some of our green driving tips and you’ll help out not only Mother Nature but your pocketbook as well.