Browse the article How the Air Car Works 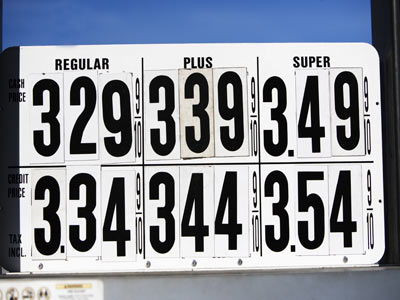 Gasoline is already the fuel of the past. It might not seem that way as you fill up on your way to work, but the petroleum used to make it is gradually running out. It also pollutes air that's becoming increasingly unhealthy to breathe, and people no longer want to pay the high prices that oil companies are charging for it. Automobile manufacturers know all of this and have spent lots of time and money to find and develop the fuel of the future.

The search is on, but what will this fuel of the future be? Ready-made fuels like petroleum are becoming more difficult to find and automobile manufacturers are turning to greener energy sources like batteries. These batteries can be charged with energy and placed in a car where that energy can be released. As good as that idea might seem, some manufacturers think air could become an even better energy source.

Air? At first glance, the idea of running a car on air seems almost too good to be true. If we can use air as fuel, why think about using anything else? Air is all around us. Air never runs out. Air is nonpolluting. Best of all, air is free.

­­Unfortunately, air alone can't be used as a fuel. First, energy has to be stored in it by squeezing the air tightly using a mechanical air compressor. Once the compressed air is released, it expands. This expanding air can be used, for example, to drive the pistons that power an engine. The idea of using compressed air to power a vehicle isn't new: Early prototypes of an air-powered vehicle go back to the middle of the 19th century, even before the invention of the internal combustion engine.

At least one manufacturer thinks that it's ready to sell air cars to the American public. If all goes well, these cars could be available in the United States relatively soon [source: Sullivan]. Over the next few pages, we'll look at this technology, the reasons you may want to use it -- and a few reasons you might not.

How Compressed Air Can Fuel a Car 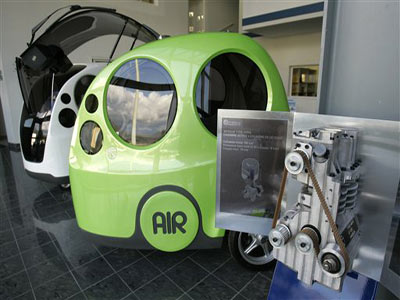 ­The laws of physics dictate that uncont­ained gases will­ fill any given space. The easiest way to see this in action is to inflate a balloon. The elastic skin of the balloon holds the air tightly inside, but the moment you use a pin to create a hole in the balloon's surface, the air expands outward with so much energy that the balloon explodes. Compressing a gas into a small space is a way to store energy. When the gas expands again, that energy is released to do work. That's the basic principle behind what makes an air car go.­ ­

The first air cars will have air compressors built into them. After a brisk drive, you'll be able to take the car home, put it into the garage and plug in the compressor. The compressor will use air from around the car to refill the compressed air tank. Unfortunately, this is a rather slow method of refueling and will probably take up to two hours for a complete refill. If the idea of an air car catches on, air refueling stations will become available at ordinary gas stations, where the tank can be refilled much more rapidly with air that's already been compressed. Filling your tank at the pump will probably take about three minutes [source: Cornell].

The first air cars will almost certainly use the Compressed Air Engine (CAE) developed by the French company, Motor Development International (MDI). Air cars using this engine will have tanks that will probably hold about 3,200 cubic feet (90.6 kiloliters) of compressed air. The vehicle's accelerator operates a valve on its tank that allows air to be released into a pipe and then into the engine, where the pressure of the air's expansion will push against the pistons and turn the crankshaft. This will produce enough power for speeds of about 35 miles (56 kilometers) per hour. When the air car surpasses that speed, a motor will kick in to operate the in-car air compressor so it can compress more air on the fly and provide extra power to the engine. The air is also heated as it hits the engine, increasing its volume to allow the car to move faster [source: Cornell]. 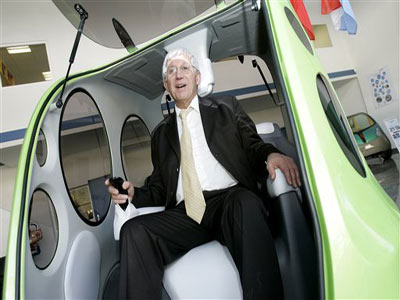 One major advan­tage of using compressed air to power a car's engine is that a pure compressed air vehicle produces no pollution at the tailpipe. More specifically, the compressed air cars we're likely to see in the near future won't pollute at all until they reach speeds exceeding 35 miles per hour. That's when the car's internal air compressor will kick in to achieve extra speed. The motor that runs this air compressor will require fuel that'll produce a small amount of air pollution. Some fuel (you can use eco-friendly biofuels or fossil fuels) will also be used to heat the air as it emerges from the tank. The newest compressed air engines also offer drivers the option of using fossil fuels or biofuels to heat the air as it enters the engine. Nonetheless, this technology represents a marked improvement over cars powered by internal combustion engines that produce significant amounts of pollution at any speed.

Air cars are also designed to be lighter than conventional cars. The aluminum construction of these vehicles will keep their weight under 2,000 pounds (907 kilograms), which is essential to making these vehicles fuel efficient and will help them go faster for longer periods of time.

Another advantage of air cars is that the fuel should be remarkably cheap, an important consideration in this era of volatile gas prices. Some estimates say that the cars will get the equivalent of 106 miles (171 kilometers) per gallon, although compressed air will probably not be sold by the gallon. A more meaningful estimate is that it may take as little as $2 worth of electricity to fill the compressed air tank, though you'll also need gasoline to power the electric motor that compresses air while driving [source: Cornell].

The vehicles themselves also will be relatively cheap. Zero Pollution Motors, which plans to release the first air cars in the United States and estimates a sticker price of about $17,800, which would make these cars affordable to budget-conscious American buyers [source: Max]. 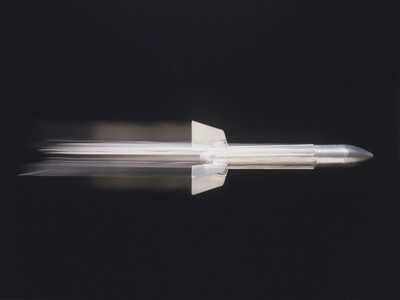 Could this happen to you in an air car crash?
Clive Streeter/Getty Images

­While an air car produces no pollution running on already compressed air in its tank, pollution is nonetheless produced when the air is compressed, both while the car is moving and while it's being refueled. As we mentioned earlier, the vehicle's air compressor will probably run on gasoline, and this gas will produce pollution when burned.

The air compressor at the gas station will probably be powered by electricity. The production of that electricity may or may not pollute, depending on how that electricity is generated. For example, coal-powered electricity could produce substantial amounts of pollution. Cleaner sources of electricity, such as nuclear power or hydropower, will result in far less pollution. According to the Web site Gas 2.0, an air car in the United States would create about .176 pounds of carbon dioxide emissions per mile based on the average mix of electric power sources during refueling. By comparison, a Toyota Prius Hybrid, which combines a battery-powered electric motor with an internal combustion engine, generates about 0.34 pounds of carbon dioxide per mile. So, while the air car is not quite pollution free, it still represents an improvement over one of the most popular hybrid cars on the market [source: Nuccitelli].

Distance could also become a disadvantage, depending on your travel habits. The distance that an air car can cover without refueling is crucial because very few filling stations will have compressed air pumps available at first. If you only plan to use your air car for short commutes -- distances less than 100 miles --will be fine. However, the one-to-two hour wait for the car's built-in air compressor to compress a tank full of air could become a problem on cross-country trips. Zero Pollution Motors -- the American arm of MDI and the company likeliest to produce the first air car for the U.S. market -- aims to have a car available soon able to travel between 800 and 1,000 miles on one tank of air plus 8 gallons of gas [source: Cornell]. Early prototypes, however, have traveled distances closer to 120 miles -- good enough for your daily commute, but not quite adequate for longer trips [source: Motavalli].

What will happen if an air car suffers damage in an accident? After all, compressed air tanks can be dangerous. To reduce this danger, the air tanks are made of carbon fiber and are designed to crack, rather than shatter, in a crash. This crack would allow the "fuel" to escape harmlessly into the surrounding air. Manufacturers feared that air escaping from one end of the tank could produce a rocket-like effect and propel the car on a jet of air. The valve on the cars' fuel tanks has been placed on the side to minimize this effect.

Despite these precautions, there is some concern that the air cars' lightweight construction might make it difficult for them to pass stringent American safety requirements and that this could hold up the arrival of air cars in the U.S. marketplace. Other factors have come to the forefront as well, and we'll learn about those next.

Air Cars in the Marketplace 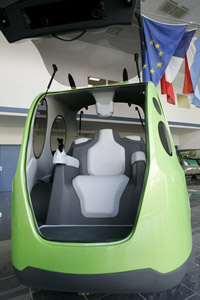 A look inside the AirPod One prototype.
Lionel Cirroneau/AP Photo

India­'s Tata Mo­tors will likely p­rodu­ce the first air car in the marketplace in the next few years. Tata Motors' air car will also use the CAE engine. Although Tata announced in August 2008 that they aren't quite ready to roll out their air cars for mass production, Zero Pollution Motors still plans to produce a similar vehicle in the United States. Known collectively as the FlowAIR, these cars will cost about $17,800. The company, based in New Paltz, N.Y., says that it will start taking reservations in mid-2009 for vehicle deliveries in 2010. The company plans to roll out 10,000 air cars in the first year of production [source: Max]. MDI also recently unveiled the joystick-driven AirPod, the newest addition to its air car arsenal. Although the AirPod generates a top speed of only 43 mph, it's also extremely light and generates zero emissions.

Major automobile makers are watching the air car market with interest. If the first models catch on with consumers, they'll likely develop their own air car models. At present, a few smaller companies are planning to bring air cars to the market in the wake of the MDI-based vehicles. These include:

Initially, the MDI cars will be the only air vehicles on the market. However, MDI has reportedly licensed the technology to manufacturers in a dozen different countries, so air cars should be available around the world soon.