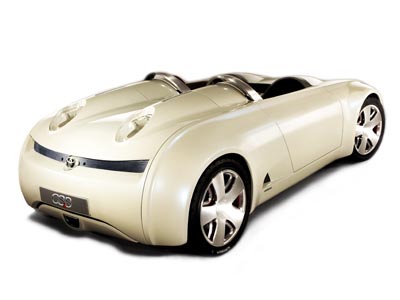 One of the first things mentioned about the Toyota CS&S is that it's a 2+2 sports car. But what exactly does that mean? At first glance, the CS&S looks like your typical two-seat sports convertible from the next century. You simply have one seat for the driver and another for the passenger. On closer inspection, however, you'll notice two bumps behind the front passenger seats. These bumps are actually removable rear canopies that open up to reveal two more seats, making it possible for up to four people to ride in the CS&S at once. For added protection when it's time to park the CS&S, the driver and front passenger can pull the backs of the front seats fully forward to create a protective cover for the cockpit of the car.

The CS&S is powered by Toyota's Hybrid Synergy Drive system, the same gas-electric technology that's inside the second generation Prius. The 1.5-liter internal combustion engine drives the rear wheels, and an electric motor runs the front wheels, allowing for power and efficiency. The CS&S has a maximum speed of 127 miles per hour (204.4 kilometers per hour) and can accelerate from 0 to 60 miles per hour (0 to 96.6 kilometers per hour) in 8.6 seconds.

The CS&S is still just a concept at this point, but it has continued to impress onlookers at auto shows around the world since 2003. And although you won't currently find this hybrid at any Toyota dealership, there's no telling when you might look out on the road, see a CS&S drive by and suddenly get the feeling feel like you're in an episode of The Jetsons.