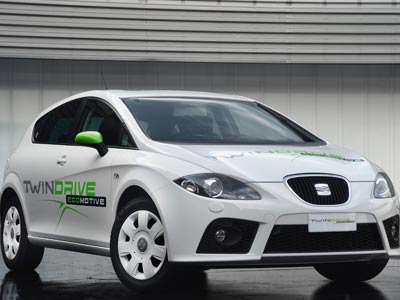 Right now, many countries are in the middle of determining how they want to approach new and improved car technologies, and organizations are currently setting a lot of goals regarding the future of car industries all around the world. In the United States, for example, President Obama signed a bill that will toughen fuel standards, raising the national mile per gallon average to 35.5 (15.1 kilometers per liter) [source: Broder].

The push for vehicles that are less dependent on fossil fuels and cars that operate predominantly on electricity is also strong. Since cars running on electric power produce little or no emissions when driven, they contribute much less to regional pollution and global warming. Around the same time as Obama's new standards were announced, Miguel Sebastián, the Spanish Minister of Industry, promised one million all-electric vehicles on Spain's streets by 2012. Although officials looked over this objective and pushed the target date back two years to 2014, it still cites a major change in how drastically the auto industry could evolve in the coming years -- that many new electric cars on the road might make a significant impact on current driving habits and send a message to other auto manufacturers around the world.

With many companies looking to do their part in developing new technologies, Spanish automaker SEAT, which stands for Sociedad Española de Automóviles de Turismo -- Spanish Passenger Car Company in English -- has introduced a brand new hybrid plug-in concept car for Spanish drivers to consider. The company, which is now a part of the German Volkswagen Group, has taken one of its current models, the León, and given it a greener, more fuel-efficient spin. With the SEAT León Twin Drive Ecomotive, SEAT hopes to move one step closer to getting rid of internal combustion engines from its fleet altogether.

So what's in store for the León Twin Drive Ecomotive? What plug-in technology will power its gasoline and electric systems? Keep reading to learn more. 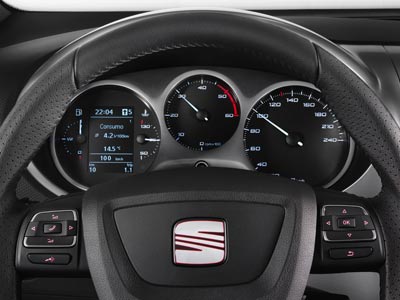 On the outside, the SEAT León Twin Drive Ecomotive resembles the original León in many ways.
SEAT

SEAT officially presented its new design to the Spanish government in January 2009, and the car people saw was one that seemed both familiar and a little new at the same time.

The SEAT León Twin Drive Ecomotive takes its exterior design straight from its conventional sibling, the León. Aside from a slightly more streamlined body, the León looks a lot like most European cars, which tend to be compact, sleek and practical. Just like the SEAT León, the León Twin Drive Ecomotive is a hatchback that resembles the Audi A3. The hybrid concept's front grill is small, and flowing contours outline the hood and spring out from the headlights to give the car a more aerodynamic feel.

The León Twin Drive Ecomotive is a two-door car, but the hatchback design gives the rear storage area plenty of space for cargo. SEAT has redesigned much of the back end of the León, which is where drivers will find a group of lithium-ion batteries that power the car's electric motor.

As far as hybrid instrument panels go, the dashboard of the León Twin Drive Ecomotive might look a bit conservative or even primitive. If you're accustomed to looking at photos of new hybrid cars packed with digital information displays that look as though they could give the driver every possible detail he or she could ever want, the instrument panel inside the León Twin Drive Ecomotive is relatively bare bones in comparison. Of course, there's the ever-reliable speedometer, which is, as you know, standard equipment on any conventional vehicle. It's located on the right side of the instrument panel. And in the center of the cluster you'll find another analog gauge that indicates engine speed in revolutions per minute (rpm). To the left of that indicator is another pair of gauges that display the fuel level and the car's coolant temperature. The León Ecomotive gauge cluster also includes a small digital readout on the left side of the display to provide the driver with useful information including the time, temperature, a digital vehicle speed readout and odometer features.

So, if the León Twin Drive Ecomotive looks slightly familiar on the outside, what's it like under the hood? 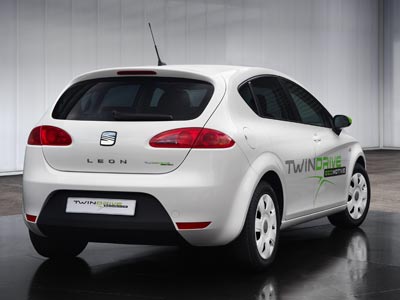 The SEAT León Twin Drive Ecomotive will switch between gas and electric power, depending on its immediate use.
SEAT

The SEAT León Twin Drive Ecomotive is a plug-in hybrid, so its makers have designed it to run on either conventional gasoline power or electric power. SEAT is already known for its fuel efficient vehicles -- the company applies the "Ecomotive" tag not just to the León concept but also to its Ibiza and Alhambra models -- so it should be no surprise that the León Twin Drive Ecomotive performs well on the road, whether it's in the city or on the highway.

The most recent model shown houses an electric battery pack consisting of lithium-ion batteries, thought by some to be the next step in electric and hybrid car battery technology. The aim, in fact, is for the León Twin Drive Ecomotive to run solely on battery power during low-speed trips in the city. This is typical in terms of hybrid cars, since most cities usually enforce strict speed limits and drivers are rarely able to exceed low speeds, especially when there's traffic.

Trips that span longer distances and require higher speeds, on the other hand, would call on the gasoline engine for greater acceleration and better range. Still, SEAT has self-imposed a 62.1-mile per hour (100-kilometer per hour) speed limit on the León Twin Drive Ecomotive -- most likely to emphasize efficiency over the need for speed.

Although it's not a fully electric car, the SEAT León Twin Drive Ecomotive represents a step toward all-electric production, and officials and engineers hope to use the new plug-in hybrid model as a chance to study better methods of electric propulsion and battery charging. In the near future, SEAT may be phasing out conventional gasoline engines completely, and when they do, they'll need to be ready for all-electric production. SEAT expects the León Twin Drive Ecomotive to be ready for production by 2014.

For lots more information about emerging hybrid and electric car technology, follow the links on the next page.