What is the Lotus Safe and Sound system? 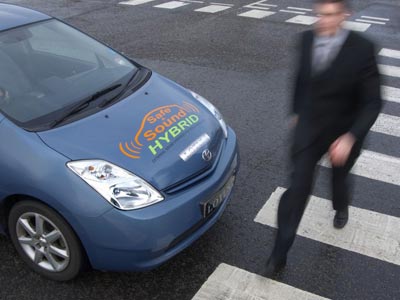 Whenever a film is set in a busy, metropolitan city, a familiar convention that aims to give you a feeling of what it's like to be in that atmosphere is a series of establishing shots. A common view has the camera looking down upon a crowded intersection, filled not just with automobile traffic but pedestrians walking along the sidewalks or crossing over crosswalks.

The accompanying soundtrack is just as important as those visuals. The rumble of engines, the whoosh of cars passing by, turning onto side streets, the squeaky whine of brakes -- all of the sounds we associate with a busy intersection. It serves the purpose of making us feel like we're crossing the street right along with the people on screen.

But what if you took away that soundtrack? Without the added white noise of car engines, the same city street might seem a little empty. Strangely enough, if that same street were filled with hybrid cars, your surroundings would seem a lot like that silent film. Most hybrids on the road are a combination of an electric motor and a gasoline engine. At faster speeds, the gasoline engine will kick in, giving the hybrid enough power to cruise on the highway. But at slower speeds, especially at busy intersections where there are stoplights and stop signs -- where pedestrians have to cross the street -- most hybrids run on electric power.

These electric motors aren't quite as powerful as gasoline engines, so they don't reach particularly high speeds. They're also much quieter than gasoline engines -- practically silent, in fact -- so many people have raised concerns about the dangers hybrid cars pose in busy, populated areas where there's a lot of foot traffic. Although a silent motor might be pleasant to the person sitting in the driver's seat, a noiseless car doesn't give a pedestrian the necessary audio cues to let them know a moving car is in the area.

Lotus Engineering, a company predominantly known for designing sports cars, has developed a system called "Safe & Sound" that aims to solve this problem, making hybrids safe for people as they cross the street. So what is the Lotus Safe & Sound system, and how does it keep pedestrians aware of nearby hybrid vehicles? The answer is on the next page.

Safe & Sound: How to Make Your Hybrid Rumble

To notify pedestrians of these silent-running hybrids on the road, Lotus came up with a simple solution -- make the vehicle sound like all of the other cars on the road. The Safe & Sound system synthesizes external engine sound for electric and hybrid vehicles, playing an artificial engine noise from the front of the car for the benefit of people on foot or riding bicycles nearby. The sound should be instantly recognizable to anyone who's ever heard a car drive past them on the road.

To develop the artificial engine sound, Lotus measured hybrid vehicle road speed signals in order to determine the appropriate pitches and frequencies a conventional engine would make at different speeds. Lotus also made and analyzed recordings of engine sounds in order to find a common frequency or "voice" for their sound. A waterproof, 300-watt loudspeaker placed near the hybrid's radiator sends out the synthesized engine noise so pedestrians can hear the approaching vehicle. A throttle position sensor determines how fast the hybrid is going, and then transfers that information to a synthesis controller. After matching the speed with the correct frequencies measured earlier, the controller outputs sound to an amplifier and through the loudspeaker. If the car happens to be all-electric, the Safe & Sound system operates continually; if the car is a gas-electric hybrid, however, the system will produce noise only when the electric motor is running.

The Safe & Sound system is particularly beneficial to blind and partially sighted people. While crossing the road, those with limited sight rely heavily on their own hearing or the hearing from another helper such as a trained guide dog to detect nearby vehicles. With audio cues from something like Lotus' Safe & Sound system, the risk of accident or injury is significantly reduced.

So Much for a Smooth Ride

Quiet running hybrids aren't the only things that have required a slight adjustment to make people feel more comfortable. When some cars starting using continuously variable transmissions (CVT), the technology essentially did away with the familiar sensation of acceleration -- that series of build-up, tension and release that most cars go through when changing gears. In other words, CVTs operated just a little too smooth for some owners. This bothered enough people that engineers eventually developed what are called software-simulated shift points, to mimic the experience of shifting gears.