Daily Use of Instant MPG Readout 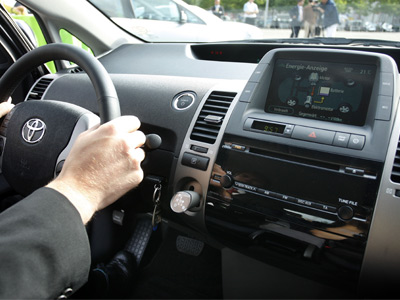 Some hybrid drivers can become captivated by watching their instant mpg readout and forget to watch the road ahead.
AP Photo/Franka Bruns

You have to be careful when using instant mpg readout to coach yourself and to refine your driving style for the best fuel economy. In fact, some hypermilers have been criticized for practices that can be unsafe. For example, following closely behind another car on the highway (drafting) might save some fuel since your car's engine won't have to work as hard to combat wind resistance; however, following too close on the highway, especially at a high rate of speed, is a recipe for disaster. Similarly, since braking represents gas wasted through lost acceleration, some hypermilers might advocate not braking much before turns. Of course, taking a turn too fast also increases your chance of losing control of the car.

Another point to consider is that it's easy to get distracted by constantly staring at your instant mpg readout and not paying attention to the road in front of you. When coaching yourself with your instant mpg readout, try to keep your attention on the road ahead. When you first start working with it, you may find it easiest to focus on one maneuver at a time -- like accelerating from a stop -- to practice getting the best fuel economy while also paying attention to what's around you. Avoiding an accident is definitely worth losing a few miles per gallon.

Some aftermarket devices also let you look very closely at your overall fuel economy, even allowing you to download data and graph your fuel consumption. Others track the data themselves and enter it into their computers, comparing routes to see which way home from work will help them net the best fuel economy.

On the other side, however, are people who install or use their car's instant mpg readout for maybe a few weeks and then begin to ignore it, slowly going back to their old, less efficient manner of driving. This behavior actually defeats the purpose of the device. After all, the main benefit of instant mpg readout is that it can help you adjust your driving habits and assist you in getting better fuel economy from your vehicle. Not just for a few weeks, but hopefully for a lifetime of fuel-efficient driving. As long as you aren't so obsessed with good fuel economy that you're ignoring safety, instant mpg readout is a handy tool that can help you save fuel (and money) at the pump.

For more information about instant mpg readouts, hybrid cars and other related topics, follow the links below.