Where can you get an instant MPG readout? 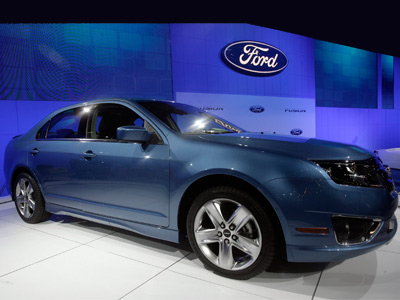 The 2010 Ford Fusion hybrid has an all-new instrument panel display that features a unique method of teaching owners how to drive in an eco-friendly manner.
AP Photo/Ric Francis

Some have even taken the hard data from instant mpg displays in a new and interesting direction. Ford, for example, has an all-new display for its 2010 Ford Fusion hybrid. The display features vines and leaves as part of the readout. The more green your driving is -- the less fuel you use -- the more lush the leaves and vines "grow." Similarly, other auto manufacturers have gauges that also use information from the instant mpg readout. When the driver is using a lot of fuel, the gauges turn red. When the driver is driving in an eco-friendly way -- using less fuel -- the gauges glow blue or green.

However, even if your car didn't come with these types of cool gauges or any form of instant mpg readout, you might still be able to get instant mpg information using an aftermarket mpg display.

In order to have one installed, your car needs to be a 1996 or later model. That's because in 1996, the government mandated that all cars sold in the U.S. must have an On-board Diagnostic system (OBD-II). While on-board diagnostics have technically been around since the late 1970s and early 1980s, it wasn't until 1996 that it was required that OBD-II systems report emissions information. Whether you know it or not, you probably have some experience with your car's OBD-II system. For instance, if your (1996 or later) car or truck's check engine light has ever come on, that's the car's OBD-II system saying there's a problem.

Since the car's OBD-II system is continuously collecting the data anyway, all an aftermarket instant mpg readout has to do is collect it, compute it and display the results for you. Most of these systems start at around $150. However, if you're able to effectively use it to save gas, it may eventually pay for itself.

Installing an aftermarket instant mpg readout isn't difficult. You simply have to connect the readout to your car's OBD-II port, and then run a wire to the display module in the vehicle's cabin. It's a fairly simply procedure, but if you're not very handy around cars or if you're nervous about proper installation, it may be best to have a qualified mechanic do the installation. Most automotive electronics stores that install car stereos and other aftermarket products should be able to do the installation as well.

Now that you know how an instant mpg display gets its information and what it all means, you can start applying that information to how you drive. Read the next page to find out how.