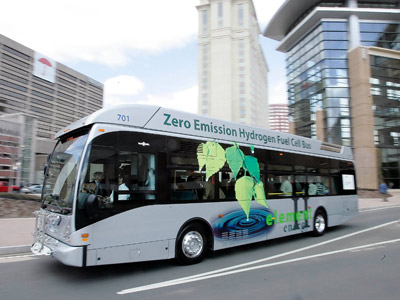 In 1839, the Welsh scientist Sir William Robert Grove took the familiar electrochemical process of electrolysis, which uses electricity to produce hydrogen from water, and reversed it, generating electricity and water from hydrogen. He called his invention a gas voltaic battery, but today we know it as a hydrogen fuel cell. Much later, in the middle of the 20th century, the technology was further developed by the inventor Francis Bacon. The technology that these two inventors devised is essential to the operation of a hydrogen car.

The first practical fuel cell system was developed in the early 1960s by General Electric for use in orbital space capsules. And then, in the 1990s fuel cells began appearing in city buses. so we know that powering vehicles with fuel cells is feasible. You can think of a fuel cell as a kind of battery, except that while a battery keeps its fuel inside itself, a fuel cell needs to be refilled. The fuel for a hydrogen fuel cell is, as the name suggests, hydrogen. As you might recall from high school chemistry class, hydrogen is the simplest of all elements. An atom of hydrogen consists of a single electron and a single proton. The fuel cell generates electricity by stripping the electrons from the protons and using the electrons to create a pure stream of electricity. The ionized hydrogen atoms then combine with oxygen to form water. The other byproduct of this process is heat, so this water generally takes the form of steam. How's that for eco-friendly driving?

The type of fuel cell used in cars is the polymer exchange membrane (or PEM) fuel cell. PEM fuel cells have the advantage of being light and small. They consist of two electrodes (a negatively charged anode and a positively charged cathode), a catalyst and a membrane. Hydrogen is forced into the fuel cell at the anode in the form of H2 molecules, each of which contains two hydrogen atoms. A catalyst at the anode breaks the molecules into hydrogen ions (the protons) and a flow of electricity (the electrons). The ions pass through the membrane, but the electricity has to go around. While it's doing so, it can be harnessed to do work. Just as hydrogen is forced into the fuel cell at the anode, oxygen is forced in at the cathode. The protons and electrons reunite at the cathode and join with the oxygen to form water, most of which become the fuel cell's exhaust. Fuel cells are designed to be flat and thin, mainly so they can be stacked. The more fuel cells in the stack, the greater the voltage of the electricity that the stack produces.

Many people think that fuel-efficient vehicles like hydrogen-powered cars will be crucial in meeting the energy demands of the 21st century. In 2003, President George W. Bush announced a $1.2 billion Freedom Fuel Initiative in support of the development of fuel cell technology. Fuel cells have two major advantages over fossil fuels. First, they don't deplete the world's finite supply of oil, which helps us preserve the existing supplies and they could also reduce our dependency on foreign oil. Second, the only byproduct from a fuel cell's operation is heat and water, which means fuel cells don't produce pollution. This is vitally important in a time when carbon emissions from cars are believed to be promoting global warming.

On the next page we'll look at how hydrogen cars and fuel cells are produced. And perhaps more importantly we'll look at where the hydrogen itself will come from.