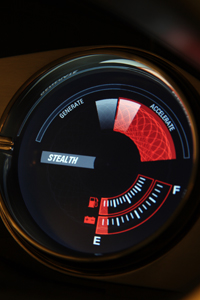 While not yet able to delve into specifics, Mark Arold said the computer architecture and software controls in the Karma are programmed specifically for that car. However, he also said that the technology has been tried and tested for reliability. "This is a technology that has been developed over the years in other platforms," he said.

The software, housed in the hybrid control unit (HCU), manages the battery and engine to obtain the best results from both systems. One simple example is the Karma's auto start/stop function. Depending on inputs to the HCU, the Karma's engine will either shut itself down at long traffic lights, or keep running if necessary. This energy conservation feature is standard to most hybrids but the Karma's software takes into account multiple factors ranging from battery power level to engine load before the stop, and uses that data to make a decision. If the engine shuts off, it will automatically switch on when the gas pedal is pressed.

This same push for efficiency and performance in the Q Drive system allows the driver to operate in two modes: Stealth Drive or Sport Drive. Each mode takes advantage of the technology offered by the system in different ways and with different results: