Fisker Karma: Plenty of Torque and Voltage, Too 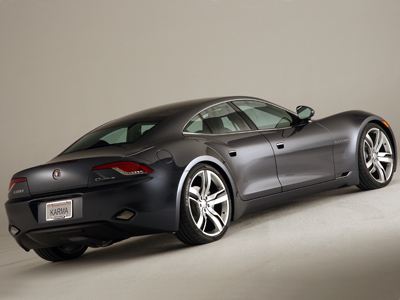 The Fisker Karma can be fully charged in as little as five hours when it's plugged into a 240-volt charging system.
Fisker Automotive

One of the advantages of using an electric motor to power a car is that they produce maximum torque the very instant they begin working. This is unlike gasoline engines that need to ramp-up to several thousands of revolutions per minute before producing their maximum torque. For hybrid car makers, electric motors are perfect for reducing emissions and maximizing mileage.

Cars generally use the most energy to begin rolling after a standstill. In other words, the most gas is needed to produce the torque necessary to get the car rolling. Once a car is rolling, the energy necessary to overcome the initial inertia becomes less and less, and therefore, less and less energy (gas) is used. Electric motors produce their maximum torque instantly and need less energy to move the same amount of mass. The Karma's motors produce almost 1,000 foot-pounds of torque (1,356 newton-meters) -- all of which is available immediately.

Of course, the electric motors require energy, and that's where the battery pack comes in. Most hybrid vehicles use a linked series of smaller batteries, around 1.2 volts each, to produce a combined voltage of anywhere from 300 to 650 volts total. This high voltage, especially in series hybrid cars, is necessary to provide the electric motors with enough oomph to get the car rolling.

Mark Arold, director of vehicle and powertrain engineering for Quantum Technologies, said the batteries can be recharged through traditional 110-volt AC home electrical systems, or a 240-volt AC system -- also found in homes and used to power large appliances like electric stoves and clothes dryers. According to Arold, it will take approximately five hours to recharge the Karma on a 240-volt system. While driving, the Karma's gasoline engine will run the on-board generator if the batteries drop below a certain power level, or if the demand on the electric motors cannot be met by battery power alone.

Like other hybrids, the Karma takes advantage of regenerative braking to help stop the car and take advantage of the kinetic energy potential of the car during a coast or brake situation. Regenerative braking uses generators that receive power from the wheels when the car either coasts or brakes and use the wheels inertia to generate a small charge which is then fed to the batteries.

With so many things happening under the hood, it seems as though "intelligent cars" are no longer the stuff of the future -- they're here now. And this programmed intelligence is what allows the Karma to be simply more than a battery-powered car. Read on to find out how.