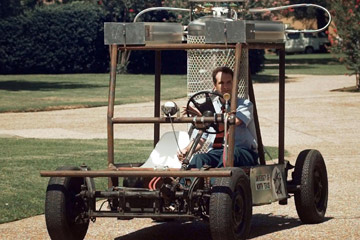 Dr. Carlos Ordonez takes the "CooLN2Car" for a spin across the campus of the University of North Texas in Denton, Texas, on Aug. 18, 1997. The car, a 1973 Volkswagen, runs on liquid nitrogen and has a top speed of 25 miles per hour.
AP Photo/Eric Gay

While it's a clean an efficient way to power a vehicle, liquid nitrogen faces the same hurdles as many other alternative fuels: At this time, there's no nationwide network of fueling stations to deliver it to consumers.