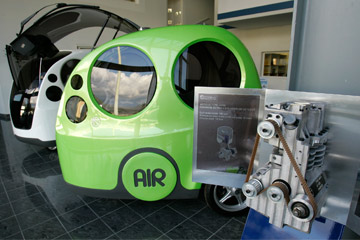 A compressed-air engine is shown on display next to "AirPod" cars at the MDI (Motor Development International) head offices in Carros, near Nice, France, on Jan. 30, 2009.
AP Photo/Lionel Cironneau

Air is everywhere, so why not use it to fuel cars? Well, compressed air cars can do just that.

In this type of vehicle, air is compressed in high-pressure tubes. While a typical engine uses air mixed with gasoline (or diesel fuel) which is then ignited with a spark (or high-pressure) to generate power, a compressed-air vehicle's engine makes use of the expansion of the compressed air as it's released from the high-pressure tubes to drive the engine's pistons.

But compressed-air cars don't run entirely on air. Electric motors are also on-board to compress the air into the car's high-pressure tubes. However, these cars can't be considered fully electric cars either, mainly because the motors don't directly power the wheels. The electric motors are much smaller than the electric motors used in other electric cars where the primary function of the motor is to power the wheels. Compressed-air cars do have to be charged, similar to an electric car, but because the motors use much less energy, the charge time tends to be much less, too.