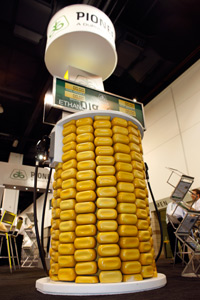 Kernels of corn are used to cover a fuel pump on display to promote ethanol fuel at the Pioneer display at the International Fuel Ethanol Workshop & Expo in the Colorado Convention Center in Denver, on June 17, 2009.
AP Photo/David Zalubowski

So now you know that you can run a car on fry grease, but what if you're a little more heath conscious and don't necessarily want to drive around town smelling of fries? What are your other options? Well, how about making sure your car gets its fresh vegetables, too?

Ethanol is an increasingly common alternative fuel. In fact, it's often added to gasoline in the summertime to help cut emissions. Ethanol is a type of alcohol (but don't even think about drinking it) that's made from plant matter. In the United States it's commonly made from corn, while in other countries, like Brazil, it's made from sugar cane.

Lots of automakers offer their cars with flex-fuel engines. These engines can run on either standard gasoline from the pump or E85 ethanol, a fuel blend that's 15 percent gasoline and 85 percent ethanol. Ethanol has been widely hailed as a good way to end America's addition to foreign oil. After all, we can grow this fuel domestically, and it's not a finite resource like oil is. Still, it takes a lot of energy to create ethanol. Also, some people say that since farmers can make more money growing crops for ethanol, they'll stop growing crops for food, which could drive food prices up.

Despite these concerns, ethanol offers a lot of benefits as an alternative fuel, and the network of ethanol fueling stations continues to increase.