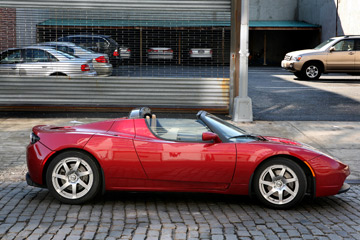 A Tesla Roadster electric car sits parked on a street in New York, on Feb. 19, 2009. Whatever the future holds for Tesla, the Roadster offers a glimpse of what's likely on the horizon for an auto industry that is increasingly going electric.
AP Photo/Craig Ruttle

So, what's been the hold up? Battery technology. Moving a car takes a lot of power, and having to do it at high speeds and over long distances can significantly drain an electric car's batteries. In the past, electric cars couldn't go very far, and once their batteries were dead, they could take hours and hours to recharge.

However, with new battery technology, some automakers are overcoming these limitations. The new batteries (lithium-ion batteries, to be exact) are the same kind that power your cell phone or laptop. They charge quickly and the charges last longer, too. Cars like the Tesla Roadster use them to get supercar performance from their electric motors. Other cars that are soon to be on the market, like the Chevy Volt, for example, use these types of batteries in combination with an internal combustion engine to create a new class of automobile called an extended-range electric vehicle. The batteries can be charged by plugging the car into a regular wall outlet; however, when the battery power begins to fade, an onboard gasoline generator switches on to recharge the batteries and keep the car going.