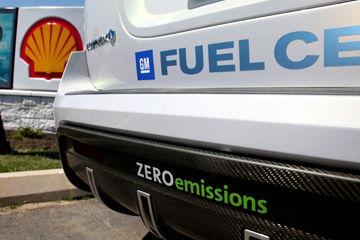 Using hydrogen to fuel your car may conjure up "Oh the humanity!" images of the Hindenburg, but it's actually quite safe. Hydrogen can actually fuel two different types of cars: fuel cell vehicles and vehicles that have an internal combustion engine that's been engineered to use hydrogen instead of gasoline.

In a fuel-cell vehicle, the hydrogen is used to generate electricity that's then used to power electric motors. So, rather than running strictly off of battery power alone, a hydrogen-powered car uses a fuel cell to generate its own electricity. In a chemical process within the fuel cell, hydrogen and oxygen are combined to create electricity, and the only byproduct of this process is water vapor. The Honda FCX Clarity uses this technology and is currently being leased to drivers in southern California.

In a hydrogen combustion engine, the car uses an internal combustion engine just like a gasoline-powered car, but instead of gasoline, hydrogen is the fuel source. Instead of harmful CO2 emissions, like gasoline cars produce, again, hydrogen cars produce only water vapor. Lots of automakers are currently testing hydrogen vehicles. Currently, the BMW Hydrogen 7 is perhaps the most famous; the company has leased several to high-profile individuals in Germany and the United States, and some tests have even shown that the car actually cleans the air around it [source: U.S. News Rankings and Reviews].

Hydrogen cars aren't widespread largely because there isn't the necessary infrastructure of hydrogen fueling stations. But our next alternative fuel is somewhat easier to find -- in fact, you're using some right now.