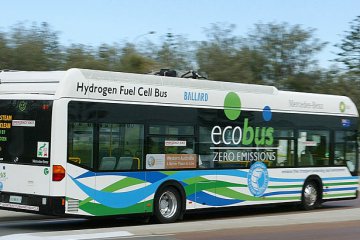 Have you ever seen an Ecobus? Check out these Alternative Fuel Vehicle Pictures to learn more.
iStockphoto/Thinkstock

As our energy demands grow, so does our dependence on fossil fuels. However, the fear of depleting resources and an increased dependence on foreign oil has thrown the spotlight on alternative energy sources, such as fuel cells. Instead of burning fuel, they work by generating electricity through a chemical reaction. A fuel cell uses a positive electrode (the cathode) and a negative electrode (the anode) with an electrolyte in between for conducting charged particles. Scientists have known about fuel cells for more than a century, and NASA actually used them in the 1960s on the Apollo spacecraft, and then later on the Space Shuttle.

One of the most efficient types of fuel cells is the solid oxide fuel cell (SOFC). In an SOFC, oxygen is sent through the cathode, releasing negatively charged oxygen ions that pass through the electrolyte from the cathode to the anode. At the anode, the ions encounter a fuel gas and react, releasing electrons (as well as water, carbon dioxide and heat). This creates a current of usable electricity. Multiple fuel cells are put together in a series known as a stack.

Not only do SOFCs produce fewer emissions, they're also about two to three times more efficient than internal combustion methods. One advantage that SOFCs have over hydrogen fuel cells is fuel flexibility -- SOFCs can run on a variety of fuels, including hydrogen and biofuels. They also use cheaper ceramic material rather than precious metals, unlike other fuel cells. They also don’t rely on reusing wasted heat (called combined heat and power schemes). Because of these numerous advantages, SOFCs have already proved useful for heating buildings.

However, numerous constraints have limited their applicability on a wide scale in things like cars. Namely, the SOFCs are very big and very hot. The high temperature allows for higher efficiencies, but it also poses engineering problems. Typical SOFCs that have been on the market, such as the Bloom Energy Server (known as the Bloom Box), use thick electrolytes in the fuel cells to add structural support. But this causes more electrical resistance that needs to be overcome by high temperatures.

In 2011, however, researchers at the University of Maryland announced developments using a new design and different materials for the electrolyte that allow for a much smaller size. The researchers also successfully reduced the operating temperature significantly to 650 degrees Celsius (1202 degrees Fahrenheit), down from 900 degrees Celsius (1652 degrees Fahrenheit). This lowers the costs of the insulating materials, which are necessary for reducing the time the system needs to heat up.

Although hydrogen fuel cells have gained a lot of media attention as the future of alternative energy cars, many believe that SOFCs actually hold the most potential for transportation. For instance, even as developments continue to make SOFCs more practical for use in vehicles, we could see cars that combine the electric car battery with SOFC technology.