And when hybrids and electrics aren't edgy enough... 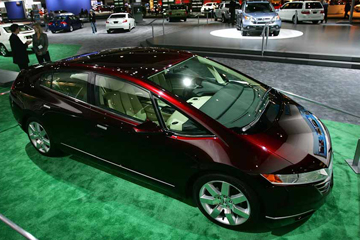 ...there's always an alternative glimmering on the horizon. Like water. Or cornfields.

Two technologies that showed a lot of early promise were based on the premise of biofuels: hydrogen and ethanol. And though a lot of research is still underway to develop efficient, cost-effective methods of harvesting this energy, and determine long-term sustainability, early attempts to mass-market these fuel sources have fallen short of their potential.

Hydrogen cars run on a fuel cell that works similar to a battery in the way it stores and supplies power -- the difference is that a fuel cell depletes and needs to be refilled. The fuel cell works by splitting hydrogen into its basic parts -- an electron and a proton. The electrons come together to form electricity to power the car, which leaves behind ionized hydrogen. A quick rendezvous with some oxygen on the way down the tailpipe, and that's it -- this car's emissions consist of water.

Hydrogen is the most abundant natural element on the planet, but that doesn't mean it's easy to harness it for fuel. Hydrogen can be produced from water and natural gas, but the processes are a pain. It's up to scientists to figure out how to make it less of a pain -- more efficient and less expensive -- than producing petroleum-based gasoline from fossil fuels. There's also the sticky issue of mass-harvesting hydrogen in an environmentally friendly way. Hydrogen is also flammable, which makes it difficult to store and transport, especially in gaseous form.

Despite all that, there are a few hydrogen cars on the market, but the market itself is quite limited. More specifically, California residents can, for a hefty monthly sum, lease a hydrogen car (the Honda FCX Clarity is the most prominent, with some competition from Mercedes) -- the cost includes maintenance, insurance, and hydrogen fuel. Toyota and Hyundai hope to start selling hydrogen cars in 2015 (Toyota's target sale price is about $50,000) even though the infrastructure will still make ownership a hassle for most Americans. GM and Toyota say that they can build the cars for 10-percent of what they used to (though the cost to manufacture is still a low six figures apiece) [source: Valdes-Dapena]. But don't get too excited. They won't be available to buy, in California or anywhere else, until considerable progress is made in terms of affordability (manufacturers have to demonstrate that they can build hydrogen cars at a cost that means they'll be priced affordably for a bigger segment of the population) and infrastructure (the hydrogen fuel is reasonably available).

Though hydrogen is not a biofuel, strictly speaking, researchers in the UK recently discovered a way to produce clean biohydrogen from food waste, with no emissions. This process could even be used to make hydrogen from the byproducts of ethanol production [source: Hill].

Of course, that leads us to ethanol, the other major biofuel with potential, which has also suffered considerable setbacks. E85, one such example, is a fuel that's a blend of 85-percent ethanol (a corn-based fuel) and 15-percent gasoline. (By contrast, regular gasoline contains about 10-percent ethanol.) By diluting down the gasoline, fewer fossil fuels are used and the car spits out a smaller concentration of harmful smog-causing hydrocarbons. Some industry experts hoped E85 would help solve our energy woes, but the entire endeavor was a mess from the start.

General Motors invested heavily in developing and marketing E85-friendly flex-fuel vehicles that could run on both biofuel and gasoline (skeptics say it was to help achieve federal fuel standard averages across GM's entire lineup). Meanwhile, government subsidies encouraged farmers to grow corn for ethanol production, rather than food. Prices were kept lower than regular gasoline thanks to federal tax credits of 38 cents per gallon. Despite these efforts, the small percentage of people who'd taken the leap of faith in buying a new E85 vehicle had difficulty finding supplies of the fuel -- gas stations that sold E85 were hard to find and located only in certain regions (an estimated 2-percent of gas stations). The expiration of those corn subsides means that there's a lot less incentive to make E85, and the tax credits that expired at the beginning of 2012 means prices are considerably higher. Prices are especially volatile for E85 because the market depends on both fuel prices and corn prices.

If hydrogen and biofuels can overcome their damaged reputations, they may still have a role in the future of LEVs. It's optimistic to think that we can power our cars with renewable resources, but at least we know it's not truly impossible.