Twice the Power, Half the Burn 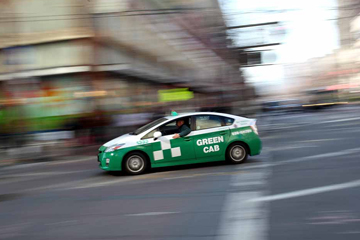 City officials announced in February of 2012 that 92-percent of San Francisco's taxi fleet is comprised of hybrid or CNG vehicles, making San Francisco the greenest cab city in the nation.
Justin Sullivan/Getty Images

Hybrids, one of the earliest and most consumer-friendly LEVs, are typically gasoline-electric configurations. Generally, a gas engine powers the car, and an electric motor kicks in to help out under acceleration or heavy load. Each manufacturer has tinkered with the exact ratios of gasoline and electric power to suit their target market, with some relying more heavily on the electric power, while others skew toward gasoline. For the most part, though, they work pretty much the same. This arrangement significantly cuts down on the amount of fuel that's burned, since the cars can get the job done with much smaller engines. Some hybrid models even use the electric motor for all low-speed or low-load driving.

Hybrids have a host of other features that contribute to their energy-efficient reputation. Regenerative braking was among the most innovative of the early hybrid features, and is still in use. When the driver presses the brake pedal, the electric motor acts as a brake, sending a signal through the drivetrain to tell the wheels to slow down. The wheels still have energy in them, though, so instead of that energy being lost (as it would through regular mechanical braking) it is pushed back through the drivetrain toward the motor, where it's stored until the car needs it again for acceleration. A lot of hybrids also reduce or eliminate fuel wasted at idle by shutting off the engine when the car comes to a stop, and kicking it back on when the driver hits the gas.

The Honda Insight and Toyota Prius, both launched in 2000, were the first mass-market hybrids available in the United States. They were embraced by a small but enthusiastic segment of car buyers, for their unorthodox aerodynamic design as much as their Earth-friendly reputation. Most consumers, however, were hesitant...turned off by the angular sloping hatchbacks, the up-front cost of entry, and the smug sense of superiority that seemed to envelop the hybrids like a cloud. Now, they're available from practically every manufacturer in nearly every form. So, how did hybrids eventually manage to charm the masses?