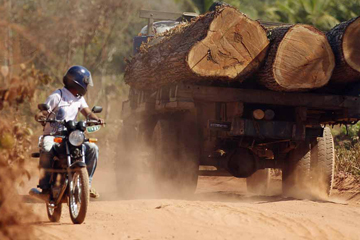 There are lots of motorcycles in Brazil -- and some can even run on flex-fuel. Want to learn more? Check out these alternative fuel vehicle pictures.
Mario Tama/Getty Images

A flexible fuel is a cocktail of ingredients -- literally, given that much of it usually consists of ethanol, the form of alcohol found in hard liquor -- that can run vehicles equipped with internal combustion engines that have been rated to use it. Flex fuels, as they're popularly known, can also be used in engines that haven't been rated for them, but it isn't recommended. Ethanol is also a solvent and if the flex fuel contains more than 10 percent ethanol (designated as E10), it will produce undesirable wear and tear. (By the way, flex fuels also aren't recommended for use as actual cocktails. Gasoline makes a deadly mixer.) On the other hand, if your vehicle is rated for E85 -- check the manual or the sticker inside the fuel door -- it can run on a mixture of 85 percent ethanol and 15 percent gasoline.

Flex fuels aren't new. Model-T Fords could run on ethanol as far back as 1908. Rising fuel prices and diminishing petroleum reserves brought ethanol blends back to attention in the 1970s. Now, there are 10 million flex-fuel vehicles in use in the United States and even more in Brazil, where 90 percent of all internal combustion engine vehicles use flexible fuel.

What's the advantage of flex fuel? For one thing, the reduced petroleum content helps preserve existing stores of fossil fuels. For another, it runs cleaner than pure gasoline, without as many contaminates. And the carbon emissions from the ethanol are no greater than the amount of carbon taken in by the plants from which it was distilled, so it's considered carbon neutral. And in some places (though not all) it's cheaper than regular gasoline.

What are the disadvantages? Flex fuel gets lousy mileage, so that cancels out a lot of that cheapness advantage. And the vegetation that goes into making ethanol could have been used as food, so ethanol production reduces the supply of certain foods (including ones used to feed animals raised for their meat) and increases the price (of some foods) to the consumer.

Still, if you're interested in saving the planet you live on and saving a little money in the process, you might want to give flexible fuel a try. And if you're a motorcyclist, you might want to use it in your motorcycle too. Well, you can, though you just might have to import your bike from Brazil. Let's look at some of the bikes that are available...

They've got an Awful Lot of Ethanol in Brazil

Given how crazy Brazilians are about flexible fuel vehicles, it's amazing that there weren't any flex-fuel motorcycles available there (or anywhere else) until 2009. That's when Honda launched the CG150 Titan Mix, with Honda's patented Mix Fuel Injection System. What makes the Mix Fuel Injection System different from other systems is that it doesn't just let the bike use the standard E10 (10 percent ethanol) and E85 (85 percent ethanol) mixtures that most flex fuel engines use. It can use almost any mixture of ethanol and alcohol, up to 100 percent ethanol, by monitoring the oxygen content of the bike's exhaust and detecting what percentage of gasoline and ethanol the engine is receiving, and then adjusting engine function to take advantage of the exact percentages. Because of problems using ethanol in cold weather, a warning light tells the rider to adjust the system for a special cold-weather mix to prevent the fuel from freezing.

The Titan Mix, which runs at 14.3-horsepower at 8,500 rpm on pure ethanol, proved to be just the first in a line of flexible fuel motorcycles from Honda:

And if you're not up to the challenge of importing a motorcycle from Brazil, there's a do-it-yourself option available. Oddly, flex fuel bikes don't seem to have caught on (yet) outside Brazil, but it's possible to retrofit your own motorcycle for flex fuel with higher ethanol content than 10 percent. A company called Change2E85.com claims to have a conversion kit available that will convert a motorcycle to full flex fuel compatibility.

We all know that alternative fuels are the wave of the future, but flex fuels are here now. So for those of us who don't live in Brazil, why is it so hard to find a motorcycle that runs on variable mixes of ethanol? This may have to do with the reduced mileage of ethanol, which has reduced its popularity, or at least its availability throughout much of the developed world. But if you're an environmentally conscious biker, you might consider writing Honda and asking them if they'll make their flex-fuel bikes available in the U.S.