by Clint Pumphrey
Prev NEXT
2

Both Can Be "Green" 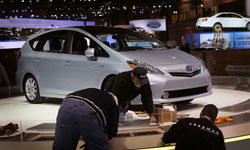 Not so different from your Prius.
Scott Olsen/Getty Images

We spend an ungodly fortune on gasoline -- more than $4,400 per household in the United States in 2011 [source: Rooney]. Then there's the cost of maintenance, insurance and parking, assuming we can find spaces in crowded mall parking lots and urban garages. And don't even get us started about the environmental impact. According to a 2006 report by Environmental Defense, U.S. cars and light trucks emit the equivalent of 314 million metric tons of carbon dioxide annually. That's the amount of carbon you'd find in a coal train -- one that was 50,000 miles (80,467 kilometers) long. Americans account for 5 percent of the world's population, but account for nearly half of the world's automotive carbon emissions, which are a powerful contributing factor in climate change [source: DeCicco and Fung].

If you're concerned about protecting the planet and fighting climate change, you probably already are driving a hybrid gasoline-electric vehicle such as a Toyota Prius, or -- if you're really a hardcore green zealot -- a fully electric vehicle such as the Nissan Leaf. But PRT systems, whose vehicles are controlled by a central computer to operate at optimal efficiency, are even easier on the Earth. The Ultra PRT system at Heathrow, for example, reportedly produces 70 percent fewer carbon emissions than cars would and uses about one-fifth the energy required to propel a full-sized shuttle bus [source: Daly].