by Clint Pumphrey
Prev NEXT
4

Both Enable You to Reach Places Safely and Quickly 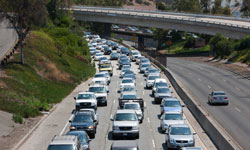 How much time could you save by avoiding traffic?
Ed Freeman/Photodisc/Getty Images

The Ultra PRT system at Heathrow moves at a speed of around 25 miles an hour (40 kilometers per hour), which is only slightly slower than the maximum speed limits allowed on the streets of major cities such as New York and Chicago. And when it comes to getting around in a congested urban area, a PRT system might even get you there faster. PRTs would move along their own railways, isolated from other vehicle traffic, so passengers wouldn't have to worry about getting caught in traffic jams. And once a rider summoned a PRT vehicle and got in, that pod automatically would merge into the railway and closely follow the pod in front of it. Since all the vehicles on the system would be tied into the same computer network, you wouldn't have to worry about another driver cutting you off or causing a fender bender, and you wouldn't have to be concerned about traffic lights.

"It's like an automated taxi that runs on its own roadway and doesn't have to stop," Peter Muller, president of PRT Consulting, a Colorado-based company that works with cities and agencies to study personal rapid transit feasibility, told CNN in 2011.That's one reason some cities are looking to build PRTs in currently-congested areas; San Jose, Calif., for example, is looking at building a PRT system to connect the city with a local airport and a proposed train station. But Muller told CNN that his company also has been developing blueprints for future car-free cities where residents would rely entirely upon pods [source: Almasy].