5 Impressive Qualities of the HyperCar 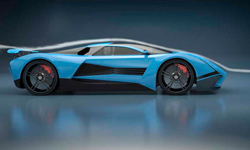 When we drive our internal combustion vehicles, we take carbon and other elements that have been removed from beneath the earth and release them into the atmosphere. Like our lungs, the atmosphere has only a limited capacity to filter the excess particles before experiencing unpleasant side effects. The most noticeable of these is a global rise in temperature.

The evidence that accelerated climate change is happening, and that human activity is largely the cause, is now "unequivocal," with even former skeptics coming around to the idea that the planet is heating up [sources: American Meteorological Society and Muller].

Cars are responsible for just over half of the carbon dioxide emissions for a single household, according to the U.S. Environmental Protection Agency. Blame cars' basic design, for one. Traditional automobiles are notorious for their wastefulness. Only 0.3 percent of the energy produced by a car engine actually goes toward moving the vehicle's driver, according to Lovins, of the Rocky Mountain Institute [source: Nova].

Where's the rest of it go? Lovins says 87 percent is used up in other parts of the car: engine, driveline and accessories...in other words, everywhere else but the wheels. For all its advances, the modern automobile is the moving equivalent of a drafty, leaky house.

The hypercar, on the other hand, aggressively seeks to remedy these shortcomings. Efficiency is the whole point of a hypercar. The Toyota Prius, widely regarded as a highly efficient car, has an EPA mileage rating of 42 miles per gallon (17.9 kilometers per liter). The stingiest of hypercars, by contrast, can achieve endurance of more than 200 MPGe! (The Rocky Mountain Institute has now taken to calling this class of autos "ultra-light, low-drag" vehicles. Not as melodious or sexy as "hypercar," but we can see how they might want to avoid confusion with the original Hypercar [source: Rocky Mountain Institute].

"Clean" and "green" are often subjective labels since it can be difficult to trace the sources of one's electricity. But clearly it's conceivable that an all-electric hypercar could receive all its power from non-polluting renewable sources -- and therefore be completely non-polluting, or carbon neutral.