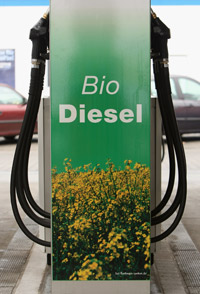 Alternative fuels like biodiesel are often inexpensive (or even free).
Sean Gallup/Getty Images

Most people exercise to burn off fat, which is excess energy stored on the body. With obesity rates in the U.S. rising, one thing we have plenty of is fat, and it turns out you can run your car on it.

Now, before you hook up your car to your hips, it's not that simple. Alternative fuels, like biodiesel, allow an engine to run off of natural, renewable fuel sources like plant or animal oils. These oils, like peanut or vegetable oil, or even leftover french fry grease, have to undergo some processing to turn their fat into energy an engine can use, but once they do, they can power a regular diesel engine. One side effect is that as the car runs, it will smell like whatever type of oil was used to power it. Biodiesel cars can give you a mean french fry craving that way.

Biodiesel has the benefit of being largely free or low-cost (if you have access to large quantities of grease or cooking oil) and renewable, since plant oils can be replenished by growing more plants and animal oils are a by-product of food production. There are downsides, though. There isn't as much energy in these oils as there is in petroleum-based oils like gasoline or diesel, so mileage is lower. Also, there isn't a biodiesel infrastructure in place. If you want this kind of fuel, you'll often have to make it yourself. There are kits that help you do it, but it's a lot of work.

A second and more practical gas alternative is ethanol. Ethanol is fuel made from plant material like corn or wood pulp. It's essentially alcohol with a little bit of gasoline mixed in. Not every car engine can run on ethanol. General Motors has several models it designates as flex fuel capable. That is, those models can run either on gasoline or ethanol. Ethanol is also becoming available at a number of gas stations across the country, making it more practical than biodiesel.

Since ethanol is made from plants, it's a renewable resource. It can also be produced in the U.S., which protects the economy from global forces. There are a number of downsides to ethanol, however. It takes a lot of energy to produce. Because it picks up impurities when it travels by pipe, ethanol must be transported by truck and barge -- which is expensive. Finally, so many farmers have sold their crops to ethanol producers that it has contributed to the rise of food prices across the world.­

Like gasoline, there are downsides to using ethanol as fuel. But while a large-scale switch to ethanol may not be ideal, ethanol is one way individual drivers can go green and be a part of the overall solution to conserving resources and easing pollution.