Fuels of the Future 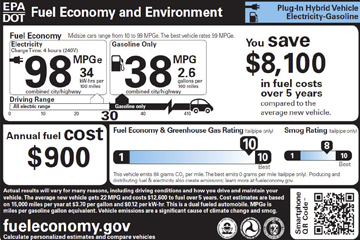 The EPA has designed the new label to accommodate several alternative fuels. This example identifies the vehicle as a plug-in hybrid.
Courtesy of fueleconomy.gov

At present, most cars use internal combustion engines and run on gasoline. Already, however, vehicles using alternative sources of power, such as battery electric and hybrid drivetrains, are starting to appear on the market. The EPA has designed the new label to accommodate several of these alternative fuels and the labels may differ for some of them. The most obvious difference will be at the top of the label, where the type of fuel is identified. For instance, this example identifies the vehicle as a plug-in hybrid. (There are also headers for flexible fuel gasoline-ethanol (E85) vehicles, diesel vehicles, compressed natural gas vehicles and hydrogen fuel-cell vehicles.) Most of these have labels modeled after the ones for gasoline-powered vehicles. The most significant difference in these alternate labels is in the fuel economy section of the hybrid-electric vehicle label.

This label is for a series plug-in hybrid. Because this form of hybrid runs on battery-powered electricity until the battery goes dead and then runs on gasoline, the sticker gives mileage for both forms of power, plus the time it takes to recharge the battery. Below this is a timeline showing how long it will run on battery power before it switches to a gasoline-powered engine. For parallel plug-in hybrids, which run on both electricity and gas until the battery goes dead, the timeline is somewhat different, showing how long the vehicle will run on a combination of power sources until switching over to just gasoline.

Pure battery-electric vehicles have a somewhat different fuel economy section. This is almost identical to the label for gasoline-driven vehicles, except that it measures kilowatt-hours used per 100 miles instead of gallons and has a timeline similar to that of the hybrid label, showing how far the vehicle can travel between charges.

And that should cover everything you'll need to know about EPA labels the next time you go auto shopping. Just remember to take your smartphone with you!