The Tale of the Tailpipe 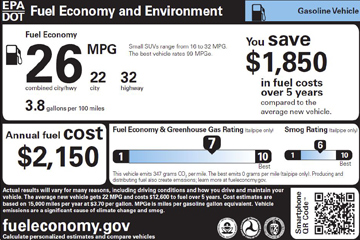 Two horizontal bars rate the vehicle on a scale of 1 to 10 for greenhouse gases and smog.
Courtesy of fueleconomy.gov

Tucked down in the lower right portion of the label, where you might not even notice it beneath all those large numbers telling you about your mileage and gas savings, is the environmental impact section of the new EPA label. This part of the label is all about emissions from the car's tailpipe. Two horizontal bars rate the vehicle on a scale of 1 to 10 for greenhouse gases and smog, with 1 meaning that the car produces a huge amount of tailpipe pollution and 10 meaning that its emissions are very low and possibly even zero. There are several questions you might have about this. The first is: What's the difference between these two types of emissions? And the second is what do the numbers between 1 and 10 actually mean?

Greenhouse gases (which for cars generally refers to carbon dioxide, also known as CO2) are gases that, when they become part of the Earth's atmosphere, trap the heat of the sun and cause the air to become warmer. A certain quantity of greenhouse gases in the air is actually desirable, because without greenhouse gases the Earth would lose most of its heat into space, become covered with ice and we'd freeze to death. But our planet already has enough greenhouse gases to keep us warm and adding more gradually heats up the environment, leading to global warming and destructive climate change, so the closer this bar gets to 10, the better. You'll notice that the EPA combines fuel economy and greenhouse gas emissions into a single rating. That's because greenhouse gas emissions are directly proportional to fuel efficiency. But if 1 is the worst rating and 10 is the best, what do all the numbers in between mean? They're based on a chart created by the EPA that assigns numerical ratings to ranges of CO2 emissions, like this:

So, for example, a car with a rating of 7 for fuel economy will get an estimated 23 to 26 miles per gallon of gas and will emit between 335 and 394 grams of CO2 per mile.

And what about that smog rating? Smog, in this instance, refers to gases such as nitrogen oxide, non-methane organic gas, carbon monoxide and formaldehyde, as well as particulate matter from partially burned fuel, that are released through the car's tailpipe. Once again, the worst rating is 1 and the best rating is 10.

Note that EPA is careful to specify that these are tailpipe emissions. Just because a car doesn't emit much in the way of pollutants from its tailpipe doesn't mean that pollution isn't produced in the manufacture of the fuel. This is even true for the electricity that powers electric cars. Usually the batteries in these cars are charged directly off the local power grid, which gets its electricity from power plants that may in turn use methods of generating electricity, such as coal burning, that themselves produce pollution.