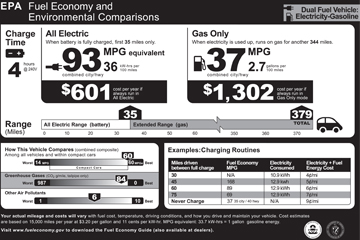 The Chevy Volt from General Motors runs so efficiently on its electric motor that many owners report going more than 1,000 miles (1,609 kilometers) before having to refill the modest tank of its reserve gasoline engine. Talk show host and avid automobile collector Jay Leno reportedly went more than 11,000 miles (17,703 kilometers) in his Volt without refueling the gas tank [source: Garrett].

Life as a hybrid or full electric vehicle owner certainly has its perks: When everyone else is complaining about high fuel prices, you get to brag about how fuel costs are smaller than a rounding error in your monthly budget.

Ay, but here's the rub: Even though you might not pay as much for fuel as you would owning a straight-up, internal combustion-engined vehicle, electricity still isn't free. OK, so maybe it is if you've bolted a self-sufficient solar array to your roof, but work with us a moment. For most folks with electrically powered vehicles, the piper to be paid will not be the corner gas station, but the local electric utility. You may or may not come out ahead on fuel costs when all is said and done after buying an electric vehicle.

So if you're trying to decide between a battery-powered electric or hybrid car and a conventional, internal combustion-powered ride, how can you tell which one is the most efficient?

The answer lies in miles per gallon equivalent, or MPGe. As the name implies, it provides a handy way to compare the fuel efficiency of vehicles that run on different types of fuel sources. Obviously, you'd be hard-pressed to measure electricity in gallons, which is a measure of volume -- those twitchy little electrons just won't stay put in a container. So to give consumers a meaningful point of comparison in a marketplace bustling with choices, MPGe was born.

This article will answer some of the bigger questions about MPGe. Who thought of it? What are the numbers and formulas for figuring it out? What does it mean when MPGe appears on a window sticker or a television commercial for a particular car?

So put on your thinking cap, because up next, we'll look at how to crunch the numbers to figure out MPGe. It's actually not that complicated -- we promise!

For vehicles that use a liquid fuel like gasoline, diesel or even ethanol, the miles-per-gallon measurement, commonly abbreviated as "mpg," works well. At a glance, you can tell from a car's mpg rating whether it'll be an infrequent visitor at refueling stations or whether it'll guzzle like a group of frat boys visiting Cancun.

But for cars that don't use a liquid fuel, the term miles-per-gallon is pretty useless, since gallons (and liters) are a measurement of liquid. The problem isn't just with electricity. Take gases used for fuel, for instance. Units of compressed natural gas are expressed in cubic feet or cubic meters, depending on where in the world you happen to live. Now there's a measurement likely to confuse your average car buyer.

Electricity, when measured for the purpose of billing a customer, is expressed in kilowatt-hours. To put that in some context, ten 100-watt light bulbs running for an hour would equal one kilowatt-hour (kWh). While that does mean something, it's still not a very helpful measure if you're Tom Tirekicker, researching and trying to compare different vehicles' performance.

What we need is a measure that's usable for comparing vehicles with different fuel technologies. To do that, we must first figure out how much energy is stored in a gallon of gasoline and then convert that to electricity. The Environmental Protection Agency (EPA) has done the heavy lifting on that science problem already: According to the agency, one gallon of gasoline contains the same amount of energy as 33.7 kWh.

When you break it all down, our dear old friend miles per gallon measures the distance a vehicle can travel using a given unit of energy. We want to do the same thing with our electric-powered vehicles -- but by swapping out gallons for the more appropriate kilowatt-hours. It might sound complicated at first, but the many minds involved have managed to boil all that down to a quite simple, elegant formula:

Here's a real world example, the EPA's rating for the electric Nissan Leaf:

OK, so E=MC2 it ain't, but still not bad for something designed to quantify a concept that's so complex.

Thus, you have a (reasonably) accurate, meaningful way to compare automotive apples to oranges (while leaving "automotive lemons" out of the mix, one would hope).

Clearly this is a treatment that will work well with electric vehicles. Just remember, the "e" in MPGe stands for "equivalent," not electric. Next we'll take a look at all the different fuel types to which this measurement applies.

The MPGe rating applies to more than just cars that run on battery power. It's also intended to help make accurate comparisons of cubic feet of compressed natural gas and kilograms of hydrogen to the more familiar gasoline.

Beginning with the 2013 model year it will be mandatory to show the MPGe number on new car and light truck information labels for what the EPA terms "advanced technology vehicles," including electric vehicles, electric-gasoline hybrids, compressed natural gas-powered vehicles and fuel cell vehicles [source: EPA].

Conventionally fueled vehicles will continue to carry the standard "mpg" listing, and all new car and light truck window stickers will list a bunch of text and pictorial information about each vehicle's fuel efficiency and emissions. In addition, auto shoppers equipped with QR code-capable smartphones can scan even more information from a QR symbol printed on the new vehicle's window label [source: EPA].

And for the record, the methods for calculating MPGe for window labels and for calculating Corporate Average Fuel Economy (CAFE) numbers are two different formulas. One of the critiques of MPGe is that it uses a "tank-to-wheel" approach instead of "well-to-wheels" -- the latter takes into account how the energy was produced "upstream," at say, an oil refinery or coal-fired power plant [source: Weissler].

While the new measurement might not satisfy everybody, there's no denying that it marks a major, ahem, milestone in the advancement of alternative fuel vehicles.

Stick it to 'em, Mr. Monroney!

Back in the days before instant search results on the Internet or immediate advice from friends via smartphone, consumers were much more at the mercy of salespeople. That's because the latter had the upper hand when it came to possessing information about certain products -- like cars. Senator Almer Stillwell "Mike" Monroney, a Democrat from Oklahoma, made a big contribution toward empowering buyers by pushing through the Automobile Information Disclosure Act of 1958. The legislation required, among other things, that new cars carry stickers listing the suggested retail price, details and prices of standard and optional equipment, and other consumer information. Later, requirements were added to list fuel economy and crash-worthiness ratings. Monroney died in 1980, but to this day new car labels also bear the moniker "Monroney stickers," in acknowledgement of the guy who pushed through this consumer-friendly requirement [sources: Peele and Simanaitis].

The first time I ever wrote at length about electric cars, George Bush was nearing the end of his term as president. That would be the elder George Bush. As we now know, certain automotive companies spent much of the ensuing decade innovating, risking big with technology and betting on long-term trends like rising fuel prices. Other companies thought such pursuit was sheer folly, a technological money pit on any number of counts. In addition, alternative fuel vehicles have carried a millstone of political and ideological arguments about their effectiveness and competitiveness for many years.

Writing this piece made me realize just how far we've come in the evolution of these vehicles and in their acceptance by auto companies and the public. The fact we'll be adding a new automotive term, MPGe, to our everyday language is huge. The measurement has its detractors, to be sure. But for the vast majority of car buyers, MPGe gives a helpful translation of how vehicles with very different fuels stack up to one another. Here's a free prediction for you: With the use of MPGe becoming mandatory, expect to see an "arms race" of auto manufacturers seeking to knock down significant markers: 100 MPGe, 150, perhaps even 200 MPGe and beyond!