Browse the article How to Get Better Fuel Economy 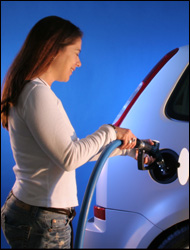 Getting better fuel economy is easy if you follow a few simple driving rules. See pictures of fuel-efficient
small cars.

With gasoline prices continuing their wild fluctuations, many consumers are demanding more fuel-efficient cars and trucks. Automakers have responded by offering gas-sipping subcompact cars and gas-electric hybrid vehicles. But what are consumers to do when they have four years of payments left on a gas-hogging, V8-powered SUV?

Surprisingly, there are a number of ways that new or used vehicle owners can improve overall fuel economy by as much as 20 percent. For a vehicle that averages 18 miles per gallon, that's an improvement of almost 4 mpg and an annual fuel savings of $400 or more. Consumer Guide's® fuel economy improvement tips don't just apply to vehicles that use the most gas. Even if you have a fuel-efficient vehicle, you can still use these guidelines to get more mileage between fill-ups, thereby keeping more money in your pocket.

The Auto Editors of Consumer Guide® recommend a comprehensive approach in order to achieve the greatest fuel economy savings. Don't let that "c" word scare you. Not only are our tips easy to follow, you'll see results almost immediately. In this article, we'll cover:

How to Improve Your Fuel Economy

Consumer Guide®'s recommendations for getting better fuel economy may seem like no-brainers, but they really can make a difference. Our strategy is a three-prong approach: Alter your driving style, maintain your vehicle, and modify your driving mentality. Combine any of these tips, and you should start seeing an improvement right away.

For most of you, altering your driving style and maintaining your vehicle might seem like enough to increase fuel economy. You're likely to see perhaps a 10-15 percent improvement in fuel economy by doing those two things. However, you can save the most money by changing your driving mentality.

Consider this: If you get 16 mpg right now and you follow the steps outlined in "Altering Your Driving Style" and "Maintain Your Vehicle," you're likely to notice a 15 percent improvement in your fuel economy. That means you'll average 17.6 mpg. Over a 12,000-mile year, that's a cash savings of about $200.

By following the steps in "Modifying Your Driving Mentality" you could easily reduce the miles you drive each year by 1000. All else being equal, reducing the miles driven per year from 12,000 to 11,000 will save you $375. Combine the two, and you can reduce your annual fuel costs by $500 or more.

Next, we'll look at what you need to know about buying a more fuel-efficient vehicle. We'll look at gas-electric hybrids, as well as conventional vehicles that will allow you to squeeze out the most miles per gallon.

How to Buy a Fuel-Efficient Vehicle

­our tips should help you realize an increase in fuel economy for your current vehicle(s), there's no substitute for owning a car that's easy on gas from the day you buy it. If you're in the market for a new vehicle, there are many fuel-efficient choices across a variety of classes.

The most obvious choices for fuel-efficient vehicles are hybrids. Hybrids use a gasoline engine as their main power source, and they also have an electric motor for additional energy. The electric motor assists the gas engine during acceleration, instantly starts the gas engine at stoplights, and charges the batteries while decelerating and braking. There also are exhaust emission benefits from the hybrid system shutting off the gas engine while at stoplights. Further, purchasing a hybrid qualifies you for a tax credit. Depending on the vehicle, the credit can save you several hundred dollars.

The Toyota Prius was the first mass-produced hybrid car sold in the United States, and it continues to be extremely popular. In Consumer Guide®'s tests, we averaged 36.7-45.2 mpg. That's a far cry from the EPA estimates of 60 mpg city/51 mpg highway, but it's still better than just about any other vehicle we've ever tested. We'll have a more detailed chart of gas sippers on the next page.

Toyota's other hybrid vehicles include the new-for-2007 Camry midsize sedan. Like Prius, Camry pairs a four-cylinder engine with an electric motor. The Highlander midsize SUV also has a hybrid model. It combines its electric motor with a V6 engine and is geared to be a "performance" model. It's the quicker than conventional Highlanders, but it's also more fuel-efficient.

Toyota's premium Lexus division also offers hybrid models. The RX 400h midsize SUV is similar to the Highlander with its V6 engine/electric motor combination. Like the Highlander, it's meant to be a fuel-efficient SUV that also offers good acceleration performance. Also fitting this mold is the GS 450h. It also combines a V6 engine with an electric motor. Lexus pitches this midsize sedan as one that offers the acceleration performance of V8 engine but fuel economy of a small V6.

Though Toyota may have the largest overall lineup of hybrids, other automakers offer vehicles with gas-electric technology. Honda, Ford, and General Motors are hoping for a piece of this ever-growing pie.

Honda's hybrid lineup includes versions of its popular Civic and Accord sedans. Ford offers its Escape and Mercury Mariner compact SUVs. This year, General Motors' Saturn division introduced a hybrid version of its Vue SUV, dubbed "Green Line." Vue is scheduled to be joined in calendar 2007 by a Green Line hybrid version of Saturn's Aura midsize sedan. Chevrolet also is scheduled to get into the hybrid act in 2007 with a gas-electric Tahoe large SUV.
Hybrids aren't for everyone, however. They tend to carry a steep price premium over conventional gasoline vehicles. For example, a front-wheel drive Toyota Highlander with a conventional V6 engine has a base price of $25,940. The same vehicle in hybrid form starts at $32,490. Factoring in tax credits and fuel savings, it would take most hybrid owners five years or more to recoup the cost difference between their vehicles and conventional ones. However, with owning a hybrid comes the personal satisfaction that you're doing something positive for Mother Nature, and that's something not for sale.

Subcompact cars are an emerging force affecting the American automotive landscape. These small vehicles typically have wheelbases of 100 inches or less. Many are available in a  hatchback body style, which enhances cargo versatility. Sedans also are available.

The Honda Fit, Suzuki SX4, and Toyota Yaris are all new vehicles for 2007. Chevrolet's Aveo sedan was redesigned for '07, and the Hyundai Accent and Kia Rio were redone in 2006. Toyota's youth-oriented Scion brand will replace its subcompact xA hatchback and xB wagon in calendar 2007.

In addition to these vehicles being frugal at the pump, subcompacts also don't have steep bottom lines. The Chevrolet Aveo5 hatchback starts at less than $10,000, and most subcompact cars won't break $17,000, even when fully loaded. With this market segment getting more attention from shoppers, automakers are designing these vehicles to not only be fuel efficient, but also stylish, refined, and fun to drive.

But again, such small cars don't suit everyone' s lifestyle. Fear not, for there are other vehicles that have conventional engines and incorporate technology to help them be more fuel-efficient. One such technology is cylinder deactivation. An onboard sensor is programmed to sense certain driving conditions, such as coasting, cruising, or deceleration. It will then tell the engine to shut off half of its cylinders. Less active cylinders mean less fuel is being burned. This fuel-saving technology is employed by several automakers, including DaimlerChrysler, General Motors, and Honda.

On the next page, we'll give you a list of vehicles that are among the thriftiest you can buy, conventional or hybrid.

The Most Fuel-Efficient Vehicles By Class

Here is a list of fuel-efficient vehicles, both conventional and hybrid, as rated by the EPA and in Consumer Guide® road tests. The list is in alphabetical order. It doesn't include every single vehicle, but these vehicles are the cream of the gas-sipping crop.


In this age of continually climbing gas prices, consumers need to learn how to save gas any way they can. With the tips outlined in this article and in the above chart, saving fuel and money can be easy.