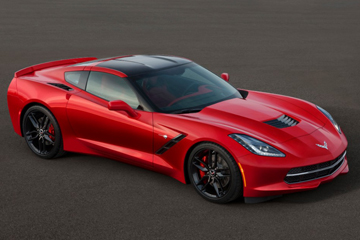 Corporate Average Fuel Economy (CAFE) standards are nothing new. In fact, they've been around since the 1970s. And yes, even with CAFE standards in place, Chevrolet can still build the all-new 2014 Corvette Stingray.
(© General Motors)

We're looking 15 years in the future, but for now, automakers and government officials have their sights set on a benchmark that falls just a little short of that -- the year 2025. The Obama Administration announced new fuel economy standards in August of 2012, with a benchmark of achieving 54.5 miles per gallon (23.2 kilometers per liter) by 2025. The new standards are estimated to save 12 billion barrels of oil, which translates to about $1.7 trillion in gasoline cost savings [source: The White House].

Enforcing these new rules is not nearly as simple as saying every vehicle needs to achieve 54.5 miles per gallon (23.2 kilometers per liter) -- it depends on complicated formulas based on the car's size and, in some cases, what other cars it sits next to at the dealerships (which sounds ridiculous, but some of the standards are, put as simply as possible, calculated across a manufacturer's entire lineup, then divided up and applied to each car). It's worth mentioning that Europe accomplishes fuel consumption reduction mainly by imposing really high taxes on fuel, which strongly encourages people to buy more efficient cars, which in turn inspires auto manufacturers to meet that demand. That's why small cars are so popular and prevalent across the Atlantic. The United States, however, has demonstrated a consistent preference for larger vehicles, even throughout several fuel crises, so the government believes that regulating supply is a better approach than manipulating demand.

Achieving these goals won't be easy, but it is possible. The new standards are actually an update to the Corporate Average Fuel Economy (CAFE) standards rolled out in 1979. Back then, it was just 18 miles per gallon (7.6 kilometers per liter), but we weren't too concerned about the environment or our petroleum sources just yet. CAFE standards are based on an average that must be calculated and applied across a manufacturer's model lineup, while the Environmental Protection Agency (EPA) rates each car's mileage on its own, based on what the car can achieve in real-world conditions. CAFE is managed and enforced by the National Highway Traffic Safety Administration (NHTSA). CAFE testing uses different procedures than the EPA, which yields results that are about 20 percent higher than real world conditions. In other words, the CAFE numbers tend to be unrealistically optimistic, whereas the EPA's ratings are a lot closer to what a real person might get in real-world driving conditions. Everyone involved is aware of these discrepancies, so it's kind of left unsaid that if CAFE testing isn't changed, it'll be a bit easier for car manufacturers to meet the new standards than it should be [source: Webster]. The new standards would be best enforced if the NHTSA and the EPA could work together, reducing confusion and eliminating loopholes. But those loopholes are, at least in part, what enables the standards to be met.

Manufacturers say that the new formulas will require designers to reduce weight as well as implement new fuel saving technology, whereas before, only one of those strategies was necessary to achieve the target for any given vehicle [source: Witzenburg]. Some manufacturers even assert that such standards are nearly impossible, and way too expensive, to achieve with existing technology. Regardless, the numbers have to be improved, and this is how it'll be done. The automakers are expected to achieve the ultimate goal in baby steps, since the CAFE standards are scheduled to increase 5 percent every year from 2017 to 2025. That gives them a few years to plan a strategy -- not all that long considering new cars are in the pipeline a few model years out. According to some schools of thought, there's a lot more to designing a fuel efficient car than simply wedging a fuel-efficient engine under the hood. That much might seem obvious, considering aerodynamics play such a huge role in fuel economy. That's just part of it, though. Some of the advanced technologies we've been hearing about -- and promised -- for years now will eventually play a huge role in achieving our fuel economy targets.

Forced to Adapt and Innovate

Hybrid cars have popularized the concept of fuel efficiency since the late 1990s, even though hybrid technology existed a good century or so before that [source: Gitlin]. And hybrids won't be going away anytime soon -- a few luxury and sports car manufacturers are even working on hybrid supercars slated to hit the streets sometime in the next few years. Considering how much the Toyota Prius cost when it first launched, a million-dollar hybrid McLaren or Ferrari might seem like a bargain. Or not.

There are a few simple tricks that manufacturers can use to make the engine more efficient, like variable valve timing for example, which is just a way to time the engine so each cycle of intake and exhaust is as energy efficient as possible. Recent innovations to variable valve timing systems allow the engine to adjust its timing based on driving conditions. Engines designed for such feats are usually found in more expensive cars, but there are ways to reduce costs to make it a more obtainable strategy for the masses. Fuel delivery systems are also undergoing some changes, like adjusting direct injection and compression to get the most power from each cycle. Some engineers are playing around with the differences between gasoline and diesel engines, while others wonder if a gasoline-diesel blend could be the answer to improved fuel economy. Turbo engines are another relatively inexpensive and efficient way to push a lot of power out of a small engine. For instance, a 1.4-liter engine boosted with a turbocharger can produce the same amount of power as a 2.5-liter engine, even though it's a lot smaller and a lot more fuel efficient [source: Gitlin]. European automobile manufacturers have been using the smaller engine and turbo approach for quite a while, and domestic automakers are catching on to its potential.

Start-stop technology is another of the initiatives taking shape, helping reduce a car's fuel consumption at idle by stopping the engine. It's similar to how a hybrid car switches over to the electric engine at a stop, but in this case, the gasoline engine is able to stop and then restart when it's time to go again. This technology requires software that coordinates transmission shifts and prevents the car's electrical systems from draining the battery at a stop. High-tech driver instrumentation is another trend that's predicted to really take off. Real-time fuel monitor gauges help drivers visualize how their driving habits affect fuel economy, which will train them to drive smarter over time. And some GPS systems are equipped to select fuel-efficient routes with fewer stops. And while these features have been trademarks of hybrid cars for years, but there's no reason they can't be implemented across the board.

Cars that sense traffic and automatically adjust to road conditions will be a major improvement; autonomous vehicles are the ultimate "intelligent car" goal. But, until those systems are perfected, there are other steps that can be taken, like borrowing a few ideas from the sports car school of thought. Reducing weight does amazing things for fuel economy, so car designers are studying the tricks that have been used by sports and performance car builders and race teams; things like reducing mass and using light weight high-tech materials (such as aluminum or carbon fiber instead of steel). These moves will help counteract some of the bloat that cars have gained in the past couple of decades -- an estimated 25 percent weight increase over the past 25 years [source: Gitlin]. To truly counteract the fat-car trend, consumers will have to concede that some creature comforts, like heavy powered seats, aren't worth the extra power consumption and weight. (Giving up SUVs entirely would be a massive victory for efficiency, but it's unlikely we'll ever reach that consensus as a society.) The bottom line is, lighter cars perform just fine with smaller engines.

If all that research and design and testing sounds expensive, that's because it is, or it will be, anyway. As mentioned before, the automakers are already a little freaked out by it, although it's still a little unclear how the costs will affect consumers. The Obama administration claims that the 2025 standards will save the average driver $8,200 in fuel over the car's lifespan, but there are still too many variables in play for this to be a guarantee, especially considering no one can predict how much gas will actually cost when that time rolls around. However, 2025 model year sticker prices are estimated to be an average of $8,214 more than 2016 MSRPs, thanks to a combination of updated required safety equipment as well as the new technology that'll make CAFE possible. These numbers are based on a 2010 study with information that might be slightly outdated, but if the estimates are even close, the inflated manufacturer suggested retail prices would wipe out any projected fuel savings. Some of these technologies and vehicle types will have subsidies and other incentives from the government, but it's still a little too early for specific details.

All these changes mean that cars over the next 15 years will look and feel very different from what we now know, even if the particulars are unclear. But if the targets are hit, well, that means good things for the planet. So, just beyond the year 2025, the fuel supply situation should have improved dramatically, but we don't necessarily have to wait that long to see progress. The small (but important) annual 5 percent increases should become more apparent over time, and the entire initiative will be reviewed about halfway through, sometime in 2019. And in the meantime, new and more fuel-efficient cars will be steadily rolled out, trying to get (and stay) ahead of the curve.

Author's Note: Where will fuel consumption and economy be in 15 years -- and beyond?

As implied by the article, my research tended to focus on the 2025 energy benchmarks, simply because that's when we'll have measurable results of success or failure in our initiatives, and that's how most of the available information happens to be presented. But it got me thinking about 2025 in general, and how much the world will have changed by then. Though fuel economy for transportation is crucial in terms of immediately reducing our dependence on fossil fuels and the adverse effects on the environment, there's a lot more to energy policy than the way we drive our cars. I'm no saint -- I've done my fair share of modifying cars for performance and pushing the limits of a press vehicle here and there. As the auto industry changes, it might be for the betterment of society, but there's no telling if it'll strip the joy from the actual drive itself. If cars do all the work for us, maybe, gradually, cars will seem less like possessions that are an extension of one's personality or a lifestyle statement. Even just a few years ago, I'd have recoiled in horror at such a notion, but the energy situation is getting dire. Getting older doesn't mean I've outgrown the urge to whomp on a supercar when the opportunity is presented (and I wouldn't turn my nose up at a hybrid McLaren), but I'm gradually seeing more of the big picture.