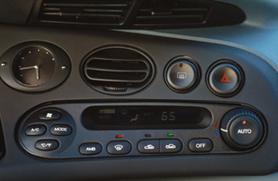 We humans aren't adapted to be comfortable in a wide range of climates. Too cold and we put on more clothes and turn up the heat, too hot and we jump in the pool and turn on the air conditioning (A/C) when possible, including in our cars.

Since the A/C of a car is powered by the gas engine, it requires extra fuel and reduces gas mileage, costing you more money and producing more pollution. The difference is not enormous, but it all adds up over time and over millions of cars.

So while you're probably familiar with the usual tips to save on A/C, like roll down your windows at low speed instead of using A/C (but not at high-speed, because of the aerodynamic drag caused by open windows), use it at little as possible, etc, there's one tip that few people seem to know:

Turn off your car's A/C a few minutes before arriving at your destination.

After all, there's no point in having the A/C on until the last second, keeping your car cool for a few minutes after you've left it. Better to turn it off in advance and save some gas. Of course, it's up to you to decide how long in advance you want to turn it off (that will depend on many factors, including how hot it is outside).

One of the side benefits of that technique is that it makes for a smoother transition between the A/C environment and the outside, so that when you leave the car, the heat shock isn't as brutal.