What are the best sources for unbiased fuel economy data? 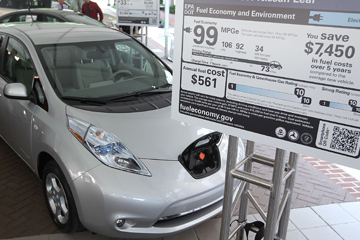 Let's say you're looking to buy a new car, and you'd really like to replace your gas-guzzling king-cab pickup truck. Or maybe you're interested in these new-fangled high-mile-per-gallon cars with their tiny turbo engines. You've never cared much about fuel economy in the past, but, hey, it's the 21st century. So you hop onto the Internet like an innocent little lamb to do some research on fuel economy. Oh, you poor little car shopper. There in front of you are the EPA numbers, which are belittled by 30 forums devoted to hypermiling, and called out for being biased -- and then there's the forum guys who say, "No, you're biased!" And now you need to go to WebMD to find out if the headache you've got will ever go away, or if it's a tumor caused by reading too many online forums.

Here's the deal. If you want a reliable fuel economy number, start with an oldie but a goodie: FuelEconomy.gov. It's the Environmental Protection Agency's Web site. It lists the official fuel economy rating for every make and model of car on sale in the U.S. back to 1984. While the EPA has updated its methods periodically, it continues to use the same method to test the fuel economy of all the cars in a model year -- even hybrids and electric cars. So you can reliably compare the miles per gallon of any vehicles you like. This is the number that's on the window sticker of every car in the dealership lot.

As they say on the internets, YMMV (that's "your mileage may vary," for you analog folks), and they say it because of EPA fuel economy. If you buy an economical little city car that sips gasoline with its pinky in the air but you still stand on the gas pedal while you tear around town like a crazy-eyed Rat Fink, you're not going to get anywhere near the EPA number. Likewise, if you buy a hybrid and become a hardcore hypermiler, the kind of driver who ekes every last electronic-mile out of the motor before allowing the gasoline engine to kick in, you're going to be on those forums bragging about your triple-digit mpgs and talking smack about the EPA.

Author's Note: What are the best sources for unbiased fuel economy data?

I know people aren't big fans of the EPA's fuel economy ratings. The testing isn't done in anything even remotely resembling a real-world scenario, and anyone with a more careful foot on the accelerator than I have will do better than the EPA's numbers. It's totally true. The best use of the EPA numbers is to compare two vehicles when you're shopping, that's all. The second best use of the EPA numbers is to try to better them in your own car. See you on the forums, nerds.