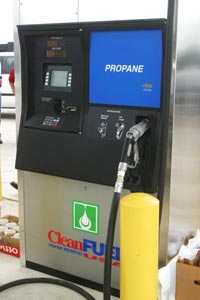 ­You probably know propane from barbecues -- it's the­ fuel in that little white cylinder attached to the side of the grill. Although propane isn't considered an alternative fuel for heating houses or grilling purposes, it's the most popular alternative to gasoline and diesel. It's unique in that it's not produced or refined like biofuels. Instead, it's a byproduct of natural gas processing and oil refining. Propane and butane (the same fuel used for lighter fluid) are collected during production in order to keep these liquids from condensing and causing processing difficulties.

But even though it comes from the same place as gasoline, it still has to compete with it. Many things can affect the price of propane, but the main factors include the cost of crude oil, the prices of other competing fuels, the balance of supply and demand, the distance propane must travel to customers and the time of year. Because demand for propane is much higher during the winter due to increased heating use, prices will be higher during these months. This causes prices to hover above and below gasoline -- while propane may be cheaper than gas in the summer time when supplies are higher, demand in winter will raise costs above gas prices. In October 2007, propane was $2.75, one cent cheaper than gas.

Natural gas is one of the three fossil fuels -- the other two are oil and coal. It's mostly comprised of methane, or one carbon atom and four hydrogen atoms. It's drawn up from underground wells just like oil, processed to remove byproducts, and then stored by the gas company. This process affects about 75 percent of the price, while distribution costs determine the other 25 percent. Again, taxes and region may cause prices to vary, but natural gas is one of the cheapest and cleanest-burning alternative fuels -- in October 2007, the national average was only $1.77, almost a dollar less than gasoline.­

Electricity prices for electric cars are the easiest prices to determine -- it's just about the same you pay for electricity to power the light bulbs in your home. Although prices vary by region, season and even the time of day you charge an electric car's battery, the national average for electricity in the United States is about 7.5 cents per kilowatt-hour (kWh). An electric vehicle with an efficiency of 3 miles per kWh will cost about 3 cents a mile, while a gas-powered engine that gets 18 miles per gallon will spend about 14 cents per miles when gas prices are $2.50.

For lots more information on cars, energy and related topics, see the next page.