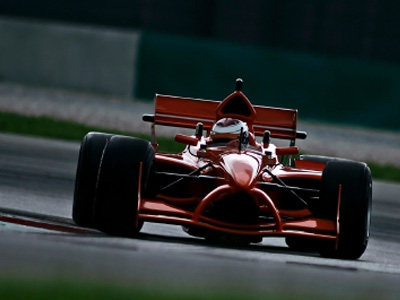 There's more to aerodynamics than just drag -- there are other factors called lift and downforce, too. Lift is the force that opposes the weight of an object and raises it into the air and keeps it there. Downforce is the opposite of lift -- the force that presses an object in the direction of the ground [source: NASA].

You may think that the drag coefficient on a Formula One racecar would be very low -- a super-aerodynamic car is faster, right? Not in this case. A typical F1 car has a Cd of about .70.

Why is this type of racecar able to drive at speeds of more than 200 miles an hour (321.9 kilometers per hour), yet not as aerodynamic as you might have guessed? That's because Formula One cars are built to generate as much downforce as possible. At the speeds they're traveling, and with their extremely light weight, these cars actually begin to experience lift at some speeds -- physics forces them to take off like an airplane. Obviously, cars aren't intended to fly through the air, and if a car goes airborne it could mean a devastating crash. For this reason, downforce must be maximized to keep the car on the ground at high speeds, and this means a high Cd is required.

Formula One cars achieve this by using wings or spoilers mounted onto the front and rear of the vehicle. These wings channel the flow into currents of air that press the car to the ground -- better known as downforce. This maximizes cornering speed, but it has to be carefully balanced with lift to also allow the car the appropriate amount of straight-line speed [source: Smith].

Lots of production cars include aerodynamic add-ons to generate downforce. While the Nissan GT-R supercar has been somewhat criticized in the automotive press for its looks, the entire body is designed to channel air over the car and back through the oval-shaped rear spoiler, generating plenty of downforce. Ferrari's 599 GTB Fiorano has flying buttress B-pillars designed to channel air to the rear as well -- these help to reduce drag [source: Classic Driver].

But you see plenty of spoilers and wings on everyday cars, like Honda and Toyota sedans. Do those really add an aerodynamic benefit to a car? In some cases, it can add a little high-speed stability. For example, the original Audi TT didn't have a spoiler on its rear decklid, but Audi added one after its rounded body was found to create too much lift and may have been a factor in a few wrecks [source: Edgar].

In most cases, however, bolting a big spoiler on the back of an ordinary car isn't going to aid in performance, speed, or handling a whole lot -- if at all. In some cases, it could even create more understeer, or reluctance to corner. However, if you think that giant spoiler looks great on the trunk of your Honda Civic, don't let anyone tell you otherwise.

For more information about automotive aerodynamics and other related topics, breeze on over to the next page and follow the links.