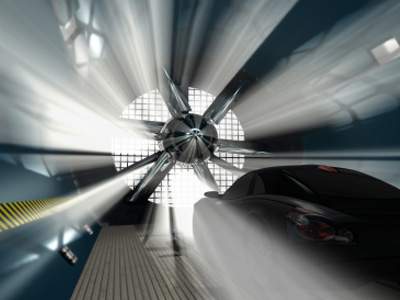 Cars (and airplanes) have their aerodynamics tested by wind tunnels.­
­©­iStockphoto.com/Kiyoshi Takahase Segundo

To measure the aerodynamic effectiveness of a car in real time, engineers have borrowed a tool from the aircraft industry -- the wind tunnel.

In essence, a wind tunnel is a massive tube with fans that produce airflow over an object inside. This can be a car, an airplane, or anything else that engineers need to measure for air resistance. From a room behind the tunnel, engineers study the way the air interacts with the object, the way the air currents flow over the various surfaces.

The car or plane inside never moves, but the fans create wind at different speeds to simulate real-world conditions. Sometimes a real car won't even be used -- designers often rely on exact scale models of their vehicles to measure wind resistance. As wind moves over the car in the tunnel, computers are used to calculate the drag coefficient (Cd).

Wind tunnels are really nothing new. They've been around since the late 1800s to measure airflow over many early aircraft attempts. Even the Wright Brothers had one. After World War II, racecar engineers seeking an edge over the competition began to use them to gauge the effectiveness of their cars' aerodynamic equipment. That technology later made its way to passenger cars and trucks.

Many think that adding a spoiler on the back of a car is a great way to make it more aerodynamic. In the next section, we'll examine different types of aerodynamic add-ons to vehicles, and examine their roles in performance and providing better fuel mileage.