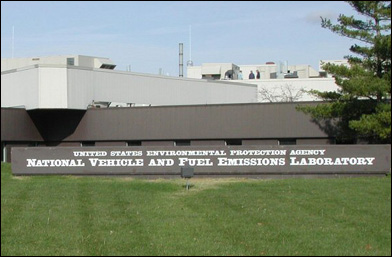 The EPA's testing facility is located in Ann Arbor, Michigan.

With the cost of gasoline at or near $2.50 a gallon, shoppers are paying added attention to new vehicles' EPA fuel-economy ratings. For many motorists, it's become an economic necessity. Choosing a model that gets an average of 25 mpg instead of one that nets only 15 mpg can save an astute buyer as much as $1,000 per year, assuming 15,000 miles driven at $2.50 per gallon of gasoline.

Manufacturers are required by law to post their vehicles' fuel-economy ratings, as certified by the federal Environmental Protection Agency (EPA), on the window stickers of most every new vehicle sold in the U.S. -- vehicles that have gross-vehicle-weight ratings over 8,500 pounds are the exception. However, these "official" ratings rarely reflect our own real-world driving experience. Depending on what, how, and where you drive, the differences can be huge. Many consumers often complain that the EPA's numbers are substantially higher than what an average owner might expect to experience in real-world driving.

Why is this the case? It has a lot to do with the way new cars and trucks are evaluated for their energy consumption. While it would seem logical to determine a vehicle's fuel economy simply by filling up the tank, driving it on the road or a test track for a set number of city or highway miles, refilling the tank, and dividing the number of miles driven by the number of gallons consumed, this is not how the experts do it.

In fact, tested vehicles don't reach the pavement at all. Rather, a car or truck's fuel economy is measured under rigidly controlled circumstances in a laboratory using a standardized test that's mandated by federal law. Automakers actually do their own fuel economy testing and submit the results to the EPA, which reviews the data and confirms about 10 to 15 percent of the ratings itself at the National Vehicles and Fuel Emissions Laboratory.

In this article, we'll detail how vehicles are tested, what the difference between the EPA's fuel economy figures and real-world fuel-economy numbers are, and why the EPA's fuel-economy findings are still important. Here's a summary of what we'll cover:

How the EPA Tests and Rates Fuel Economy 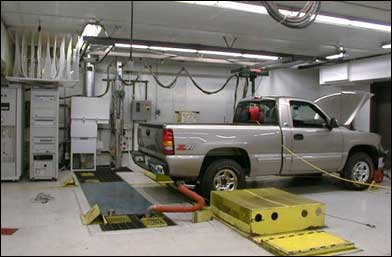 A Chevrolet Silverado's theoretical fuel economy is evaluated in the EPA's labs.

The EPA doesn't just drive the vehicle to determine how many miles per gallon it gets. Each new car and truck is tested on what's called a dynamometer, which is like a large treadmill. While the engine and transmission drive the wheels, the vehicle never actually moves -- just the rollers upon which the wheels are placed. A professional driver runs the vehicle through two standardized driving schedules, one each to simulate city and highway driving conditions, and ensures he or she is maintaining the mandated pace via a real-time computer display.

Throughout the test, a hose is connected to the vehicle's tailpipe and collects the engine's exhaust. The amount of carbon present in what's spewed from the exhaust system is measured to calculate the amount of fuel burned. The EPA claims this is more accurate than using a fuel-gauge to physically measure the amount of gasoline being burned. Still, the final fuel economy figures are adjusted downward, by 10 percent for city driving and 22 percent in highway mileage, to help reflect the differences between what happens in a lab and out on an actual road.

How Much Does That Hybrid Get?

As has been well-publicized, the gap between official and experienced fuel economy can be even wider for owners of gas/electric hybrid-powered vehicles. Most experts feel the EPA's ratings for hybrid vehicles tend to be overstated by a factor of at least 20 percent. This discrepancy can be wider yet if a motorist drives primarily on the highway, where hybrids tend to be less efficient than in stop-and-go city driving conditions (during which the electric motor shoulders more of the effort).

Ironically, the results of ongoing operating tests conducted by the EPA of a dozen hybrid cars in its own fleet significantly contradict their posted fuel-economy ratings. According to a report we found on a government website, the best the EPA's fleet could muster was a cumulative average of 37.7 mpg for the Civic, 45.7 mpg for the Insight, and 44.8 mpg for the current-generation Prius. While this is certainly admirable fuel economy, it's still far below the cars' EPA ratings that run as high as 51, 66, and 60 mpg, respectively, for the model years tested.

Why do such discrepancies tend to be more pronounced for hybrids? Experts say it's because basing fuel economy upon the amount of tailpipe exhaust automatically favors gas/electric-powered vehicles. Since some of a hybrid's power comes from an electric motor that automatically produces zero emissions, these figures tend to skew higher than simple miles-driven/gallons-consumed computations would otherwise indicate.

On the next page, we'll look into what driving factors change how many miles per gallon your vehicle gets and why that number differs from what the EPA estimates your vehicle should be averaging.

Actual Fuel-Economy vs. the EPA's Ratings 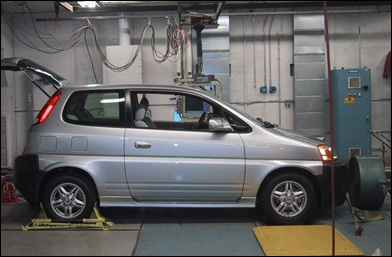 While testing done in the EPA's lab [above] may not accurately reflect real-world fuel economy figures, the EPA's numbers still provide valuable information.

In addition to the testing methods used to determine the EPA's ratings, a host of other physical and personal factors contribute to the differences between a vehicle's rated and realized energy consumption. For starters, cars and trucks used for evaluation in the EPA's tests are broken in and are in top mechanical shape. New vehicles don't usually attain their top mileage until they're driven about 3,000 to 5,000 miles, and ill-maintained vehicles will consume more gas than those that are in perfect condition. Even relatively minor upkeep factors like having incorrect air pressure in the tires can affect your vehicle's fuel economy.

Depending on where you live, the particular blend of gasoline sold in your area at a given time of the year may have more or less energy content, which in turn results in better or worse fuel economy. What's more, the EPA claims that even small differences in manufacturing and assembling can cause minor disparities in fuel economy from one otherwise alike model to another.

Also, the cars and trucks subjected to fuel economy testing are "driven" without a full complement of passengers, cargo, and options aboard -- all else being equal, the heavier a vehicle is, the more fuel an engine will need to burn in order to reach and maintain a set speed. Similarly, the vehicles are tested without the air conditioning and other electrical accessories in use, which also tends to put a greater load on the engine, and thus impacts the vehicle's fuel economy.

Other physical factors like trip length, traffic conditions, terrain, temperature, and the weather all affect your mileage. Likewise, installing exterior accessories like roof racks and cargo carriers that hamper a vehicle's aerodynamics will take their toll at the pump -- the more aerodynamic "drag" that's placed on a vehicle, the more energy it takes to run it, especially at highway speeds. Lead-footed acceleration, heavy braking, high-speed driving, excessive idling, towing, and engaging four-wheel drive will also drain your vehicle's gas tank at a higher-than-average rate. The EPA estimates that jack-rabbit starts and sudden stops alone reduce a car or truck's fuel economy by as much as 33 percent at highway speeds and five percent in the city.

An Imperfect, Yet Useful System

While the EPA's fuel-economy estimates may not be a completely accurate prediction of the kind of mileage you'll register during your daily commute, it's still valid as a source of comparison when you shop for a new vehicle. In addition to city and highway mileage estimates, a new vehicle's price sticker will show the fuel-economy range most drivers can expect to actually achieve with that particular model, the annual estimated fuel cost (based on 15,000 miles per year and a predetermined, though not mentioned, cost per gallon of gas), and the fuel-economy range for other models in its size class. The EPA's estimates for all vehicles can be found in a master list posted at www.fueleconomy.gov, and a printed version can be ordered via the website as well.

At the least, by checking this list you can get a relative idea of how one particular car or truck measures up against others in its class, or how one type of vehicle fares, on average, in comparison with others. If, for example, you're comparing two vehicles and one is estimated to get a third better fuel economy than another, you can reasonably expect to pay a third more to keep the latter's gas tank filled, all else being equal. This is also valid for noting the relative efficiency among available engines in a given car or truck's model range.

Change on the Horizon

The E.PA. is currently developing new, more accurate ways of testing vehicle fuel economy. The organization's new testing methods will take into account real-world driving factors like aggressive acceleration, hot- and cold-weather driving conditions, and the use of air conditioning while driving, for example.

Taking these widespread driving habits and conditions into account when determining fuel-economy averages should better align the E.PA.'s estimates with consumer's figures. Model-year 2008 vehicles will be the first to see the new E.P.A. fuel-economy numbers, which experts estimate will be about 12-percent lower than the current figures.

With demand for fossil fuel continuing to grow worldwide, and pump taxes remaining an increasingly popular source for state and local revenue, it's not likely that the cost of a gallon of gasoline will fall below the $2.00 mark any time soon, if ever. Some industry observers predict it might rise to as high as $4.00 or more a gallon in the coming years. Thus it behooves your pocketbook to heed the EPA's ratings, however suspect they might be, when shopping for a new vehicle to help you find a model in your size, type, and price range that will deliver the best possible fuel economy.