How can a speed bump harvest electricity? 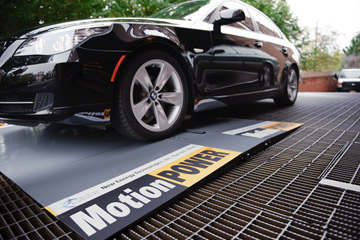 So, now you know that a certain amount of energy is lost when a car approaches and drives over a speed bump; however, let's take a look at how some technology companies are developing solutions to harness that energy as its being spent. One speed bump design (that actually looks more like metal ramp) can extract the energy being used by a car slowing down and generate about 2,000 watts when the car is traveling at just 5 miles per hour (8 kilometers per hour) [source: Biello]. Some initial public testing took place at fast food restaurants where drivers would often slow down and move at low speeds anyway. The speed bump was wired to a light next to the store that would light up whenever a car was driving over top of the speed bump.

When a vehicle drives over these speed bumps or kinetic plates as they're sometimes referred to, a lever is thrown by the weight of the vehicle. The lever turns a flywheel that spins around and creates the energy. The flywheel works similar to a car's alternator -- it spins around and creates power to run electrical components on the vehicle. However, the electricity created by these speed bumps is instantaneous, and it must be immediately directed to a source to be used [source: Biello]. Engineers are currently working on ways to store the energy efficiently so that it can be used when it's needed most.

One company, New Energy Technologies, hopes to use variations of the speed bump on rumble strips at toll plazas, stop signs, freeway exit ramps, traffic lights and anywhere else vehicles are using energy to produce sizeable amounts of potential electricity. Although the technology seems like a useful endeavor, some are skeptical that the process could ever create enough power to be practical. Some even say that the system actually causes vehicles to use more energy to go over these types of speed bumps; meaning that any electricity created is done so through the vehicle burning more fuel to achieve the desired result [source: Chapa].

Although we don't see these speed bumps in regular use right now, many new types of technology are developing with the same idea. On the next page, we'll explore another technology attempting to extract energy from cars.