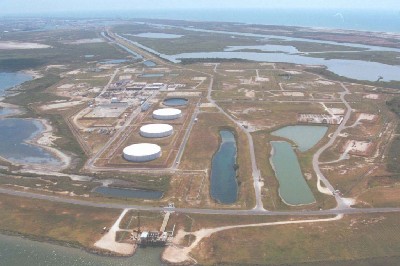 Photo courtesy U.S. Department of Energy
An aerial view of the Bryan Mound storage site of the Strategic Petroleum Reserve

After seeing how much oil the United States imports, it may be surprising to know that the United States is the world's third largest producer of crude oil. The biggest production region is around the Gulf of Mexico, and the largest producing state is Texas. The Gulf Coast region is home to two important producing areas: the Permian Basin, located in west-central Texas and eastern New Mexico, and the federal offshore portion of the Gulf. Other big oil-producing states include Alaska, Louisiana, California, Oklahoma and Arizona.

Even with the United States producing so much oil, it is still heavily dependent on foreign sources. It's that dependence that crippled the country during the oil embargo of 1973 and 1974. To make sure that this situation never happens again, the federal government formed the Strategic Petroleum Reserve (SPR). While most domestic oil is sent directly to refineries and then to the consumer market, some of it is held back and sent to the SPR.

As of April 30, 2008, the SPR stores about 707 million barrels of oil in underground salt caverns along the Gulf of Mexico [source: DOE]. Given that the United States imports about half of its oil, the Strategic Petroleum Reserve holds about a 60-day supply of oil if all imports were suddenly and totally cut off. See What is the Strategic Petroleum Reserve? for more information about how the storage sites work.

On Sept. 22, 2000, President Clinton directed the U.S. Department of Energy to tap into the SPR to bolster oil supplies. When oil supplies shrink, the SPR can be used to help make sure that people have enough affordable oil to heat their homes. President Clinton authorized the Department of Energy to release up to 30 million barrels of oil in a swap with oil companies. The companies took the oil in fall 2000 and were required to return it by fall 2001.

The SPR is the largest emergency petroleum supply in the world. It was first used during the Persian Gulf War in 1991 to keep oil plentiful and prices stable. It currently has the capacity to hold 727 million barrels of oil. In 2005, the Energy Policy Act included a directive to expand the SPR and fill it to a capacity of 1 billion barrels. President George W. Bush also recommended expanding the reserves in his 2007 State of the Union Address. The Department of Energy announced in February of 2007 that it will expand two existing sites: Big Hill, Texas, and Bayou Choctaw, La., to comply with the Act. When complete, the expanded reserves will have a capacity of 1 billion barrels.

In May 2008, in light of record-breaking crude oil prices, Congress passed a bill that mandated a halt in the filling of the reserves.

Now, we'll take a look at one of the more controversial sources of U.S. oil: the Arctic National Wildlife Refuge.