How do second-generation biofuels work? 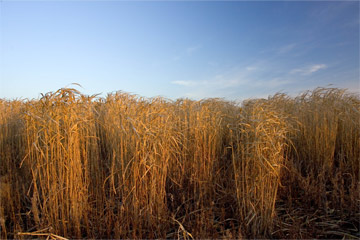 You're looking at a field of miscanthus, a key member of the second generation of biofuels that's helping to shift the biofuel focus away from corn. Want to learn more? Check out these alternative fuel vehicle pictures.
Tim Graham/Getty Images

At first glance, the fields of miscanthus that blanket Sampson County, N.C., seem of little importance. Standing 4 feet (1.21 meters) taller than a basketball hoop, miscanthus is a giant, spiky, inedible -- and some would say useless -- grass. Yet, in the view of others, these oversized blades might one day be as valuable as gold, or at least a tank of gasoline. A company called Chemtex plans to build a $170 million refinery in Sampson County that will convert 20 million tons of miscanthus and other grasses into ethanol each year [source: Ramsey].

For years, politicians, journalists and scientists have advocated turning plants into ethanol and biodiesel to decrease the world's consumption of fossil fuels, especially crude oil. Biofuel burns cleaner than fossil fuels, releasing fewer pollutants and greenhouse gases, including carbon dioxide, into the atmosphere.

Much of the world's biofuels come from food crops such as wheat, corn, soybeans and sugarcane. The energy produced by these plants is known as a "first-generation" biofuel. As it turns out, these biofuel pioneers don't hold the promise they once did. For one thing, some first-generation biofuel crops, especially corn, compete with food crops for land and water. The U.S. Department of Agriculture says that refineries that develop ethanol from corn consume roughly 40 percent of the maize crop each year [source: Blas]. In 2009, 25 percent of all U.S. corn and grain crops went not into producing food, but into producing biofuel [source: Vidal].

Such crop consumption can create many problems, including higher food prices and deforestation. In addition, the costs of converting and using food crops as a source of fuel can be pricey. That's because refineries can only use small parts of the plant for the biofuel production, such as its oil, sugar and starch content. Such inefficiency makes first-generation biofuels less environmentally pleasing. Moreover, experts now believe that biofuels will never entirely replace crude oil as the energy source of choice. In short, biofuel production is inefficient, and in many respects, environmentally and economically unsound [sources: World Bank; Science Daily].

But the future of biofuel as an alternative source of energy might not be as bleak as once thought. Thanks to miscanthus grass and other "second-generation" biofuel crops, the potential to lessen the world's dependence on foreign oil has never been greater.

The Trouble With Biofuels

The summer of 2012 was hot and dry across much of the United States, especially the Midwest, America's breadbasket. Arid conditions withered corn and other grain crops, driving up prices and straining an already weak economy.

The historic drought, the worst in 50 years, highlighted the limitations of first-generation biofuel feedstock. As food prices skyrocketed, farmers, bureaucrats and politicians began debating the wisdom of diverting food crops to biofuel production. It was a scene being played out in an increasingly hot, dry and hungry world. The problem got so bad that food aid groups and the United Nations began asking governments to scrap biofuel production mandates in order to allow for more food production. The U.N. said that when the world faces a shortage of food, countries should rethink their biofuel policies [source: Blas].

In addition to contributing to a food crisis, producing ethanol and biodiesel from feedstock is not as environmentally and economically friendly as you might think. First-generation biofuels are made from sugars and starches that are easily digested by yeast. If refineries turned every ear of corn into ethanol, it would replace only 12 percent of the gasoline supply [source: Brune].

Additionally, farmers use copious amounts of fossil fuel, water and fertilizers to grow and process first-generation feedstock into biofuel. The growing and manufacturing process that turns corn into ethanol, for example, produces only 15 percent less greenhouse gas than gasoline [source: Tilman and Hill].

Miscanthus is a great example of a second-generation biofuel crop. The grass is fast growing, drought-resistant and thrives in poor soil that cannot be used for food crops. Unlike corn and grain, miscanthus is a perennial. Farmers only have to plant it once and it will come back year after year. In addition, miscanthus and other second-generation crops require far less fertilizer and cultivation than first-generation crops, which translates into less environmental degradation and energy use.

In Sampson County, Chemtex hopes local farmers will plant miscanthus in the spring of 2013 so the company will have enough grass to feed its refinery when it opens a year later. Chemtex has already signed an agreement with Gulf Oil to purchase all of the ethanol the refinery produces. The company will build its facility on 166 acres. It should employee 300 people [source: Ramsey].

The miscanthus fields won't be competing for land that corn and soybean farmers use. State officials have already identified 100,000 acres in a three-county region, including Sampson County, which farmers can use as biocrop farmland. Some of that acreage is marginal land at best. Some of it is sandy and would make it easy to grow miscanthus and other second-generation biofuel crops. Hog farmers already use some of those acres as hog-waste spray fields [source: Ramsey].

Efficiency and production capacity are two other problems scientists must overcome. One recent study suggests that only one of nine second-generation biofuels spews less greenhouse gases into the air than fossil fuels. Moreover, many experts aren't so sure whether second-generation biofuels can provide enough fuel to power the world's automobiles [source: Birdlife International].

Although these other problems exist, scientists and engineers are confident they can make second-generation biofuels work. They're not expected to become commercially viable for several more years, but experts predict the new generation is the best answer to solve our world's energy and environmental woes.

I have written numerous articles on renewable energy sources, including biofuels. During that time, I have become convinced that no one source of energy will slake our thirst for fossil fuel. Instead, a combination of sources, from solar power to wind energy, to fuel made from plants, offers the best alternative to saving the world from climate change, which we humans have caused. It will take some time to bring down the cost of renewable energy fuel production so it can become affordable to use. I'm heartened that scientists across the globe are working on the problem.