Browse the article What is biorefining? 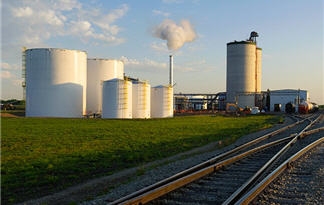 Simply stated, biorefining is the conversion of biomass to produce fuel, heat, power and chemicals. There are plenty of arguments for biorefining as the way to power the future, as well as reasons to wonder if we should think twice about the developing energy source.

Biomass is plant matter that can be converted to fuel. Wood is the most obvious example -- if you've started a campfire or used a fireplace, you've "biorefined." Grasses, agricultural and forestry residue, algae are all examples of biomass.

The Benefits of Biorefining

So what are the upsides of burning wood and soybeans as opposed to the coal and oil we're so used to? Advocates point out that biofuels can be grown anywhere, reducing our dependence on foreign oil.

There's a large environmental plus as well: Burning biomass does release CO2, but the National Renewable Energy Laboratory explains that what's put out is more or less balanced by the carbon dioxide the plant took in over its lifetime. The burning of fossil fuels release CO2 that has been out trapped for millions of years, altering the general balance of the global atmosphere.

The most common route from plant matter to power is burning it in a direct-fired system: the resulting steam turns turbines, generating electricity. Although it's not derived from a plant per se (it's a byproduct of decaying organic matter), methane gas can be used in biofuel production. Biofuels can also be used in the stead of petroleum fuels, powering cars as well as jet planes.

Depending on how the biomass is broken down, it can yield component sugars or hydrogen and carbon monoxide. What these yields lack in volume they make up for in value, producing toothpaste gel, antifreeze, plastic, glues, artificial sweeteners, photographic films, synthetic fabrics and more.

As many benefits as there are to the use of biomass for energy, there are also plenty of reasons to remain wary. Most of the downsides have to do with the production of the biofuels.

There is a finite amount of land suitable for agriculture on the planet; using more of it to grow crops for biorefining necessarily means that there will be less space for crowing food for hungry populations.

Growing biofuel sources, whether corn or soybeans, works best as a monoculture -- endless fields of the same exact crop. Monocultures are extremely vulnerable to disease, since each plant is a clone of its neighbor, they all have the same weaknesses. A bad pathogen or a nasty stretch of weather could take leave a great many consumers without electricity.

Furthermore, only large-scale operations would be able to produce enough biomass to be profitable, so local farmers would be cut out of the equation.