Is there a biofuel cell that harvests energy? 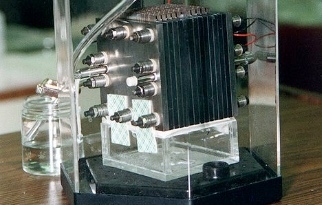 How much do you know about fuel cells?
NASA/JPL

Fuel cells, many believe, represent the future of energy production and storage. In a fuel cell, chemical energy is converted into electricity. The most commonly used fuel "source" in fuel cells is hydrogen, though other hydrocarbons—and even some alcohols and biofuels—have also been used.

How a Fuel Cell Works

Fuel cells store chemicals—typically oxygen and hydrogen—in two separate screens. The elements react with one another, thanks to an electrolyte catalyst, and send charged electrons to an anode and cathode. The motion of these electrons creates a current, which is how electricity is produced.

This process has been modified to take advantage of the appetites of bacteria. In a microbial fuel cell, bacteria feasts on organic compounds, releasing electrons as a byproduct. These electrons are drawn into a current in much the same way they are in a traditional fuel cell.

Another approach is to use enzymes instead of microbes. The idea is similar and prototypes have been used to power small medical devices in rats. In the future, our own bodies could power small devices and gadgets using such fuel cell technology.